It's made of shiny glass, has stunning looks, you know it's a Galaxy, and that one down there is the S9. Looking different hasn't been on the Samsung's checklists lately, but some designs age well and this curvy glass shape is one of these. 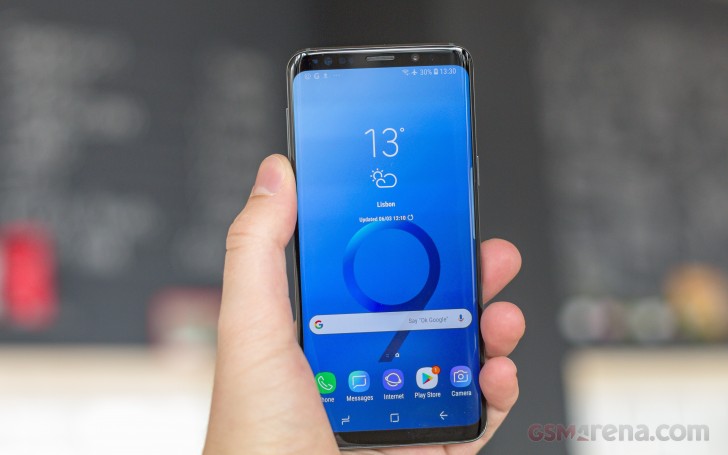 The Galaxy S9 is as big as the S8 as far as anyone is concerned. There are negligible differences in all dimensions - 1mm shorter, half a mil wider and thicker, but nobody could really detect those even when the two Galaxies are sized up next to each other. 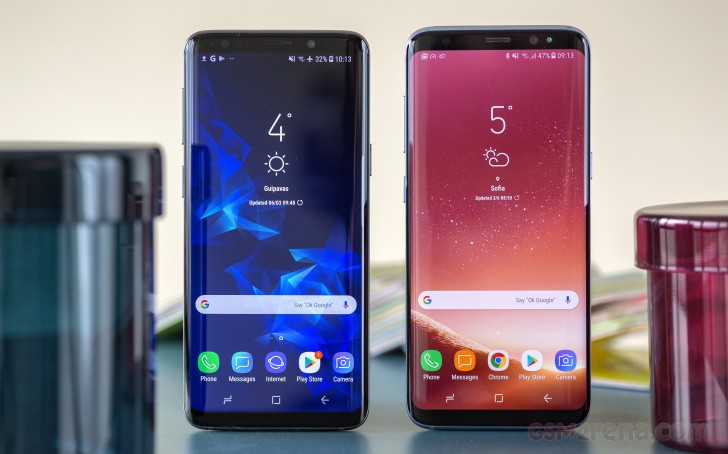 The gained weight is rather insignificant, too - the S9 has added some 8g for a total weight of 163 g.

Samsung has been a master in the glass design domain and its rule continues with the Galaxy S9. The maker pushed this so-called glass-sandwich shape with a polished metal frame in-between and it's still as attractive as in the beginning, if not more.

By trimming the screen bezels and bending the panels, the Galaxies have always had this futuristic look, because we all know everything will be round in the future, right? Unless it's a Blade Runner/Altered Carbon-like future, of course. 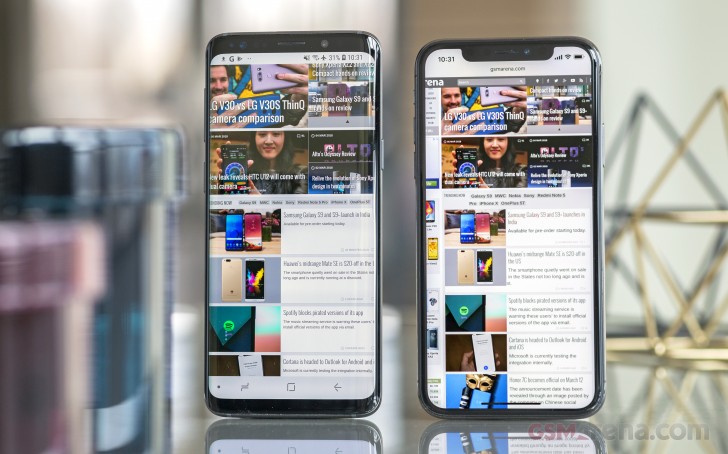 No horns on the Galaxy S9, still more futuristic than an iPhone

The Infinity AMOLED, 5.8" in diagonal for the S9, takes up most of the front. Its long sides are stretching frame to frame, as usual, while the top and bottom bezels are slimmer than ever. The pressure-sensitive Home key is beneath that screen, just like on the S8, while the top bar has seen a minor improvement - the iris scanner is now hidden under the black glass and is one less hole up there. 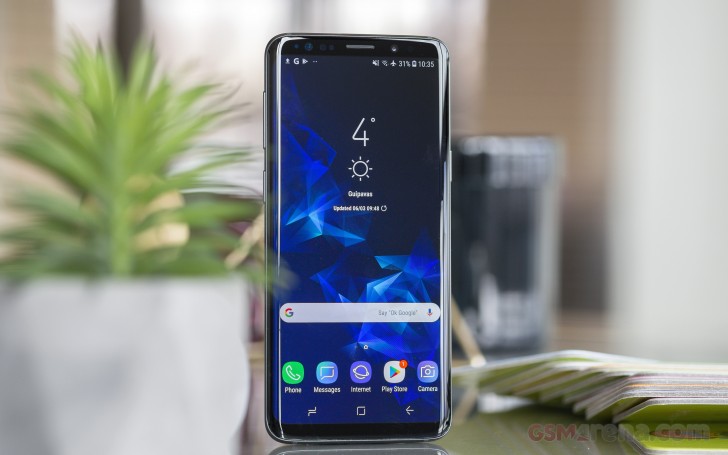 Both front and rear panels are made of Gorilla Glass, with rounded edges as usual - somewhat of a trademark for the flagship Galaxies. And while Super AMOLEDs at the front hardly suggest the exact model, the back of the S9 is where things get different.

First, the fingerprint scanner is where it should have been a long time ago - just below the camera. That alone makes the Galaxy S9 easy to pick in a lineup of its glass siblings. But if that's not enough, then there is the forever single LED flash and the heart-rate sensor placed on a new spot. 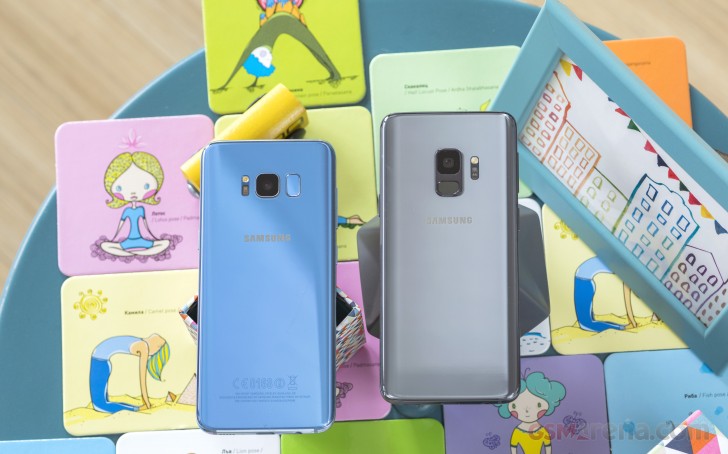 The Galaxy S9 still comes with a single 12MP camera at the back but it has new features. All flagship requirements are met with OIS, dual-pixel autofocus, and image stacking support. There is a new 4-frame noise reduction for 30% less noise than the S8 pictures. But the highlight of the new camera is the variable aperture - you can opt for f/1.5 bright aperture, or f/2.4 darker one. No Fs in between those, sorry. 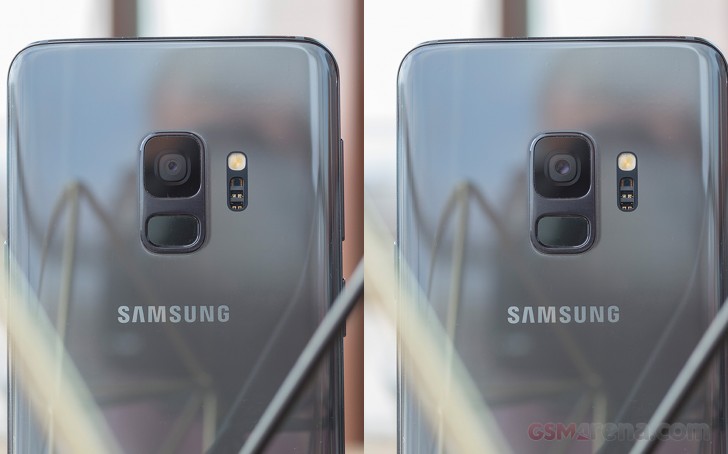 Looks can be deceiving, and there is something that got better even though it can't be spotted at first. The frame has been somewhat refined and now it's easier to pick the S9 from a table and makes it grippier and thus more secure in hand. The power key got a little better, too. Now it's bigger on the S9, which makes and thus slightly more convenient.

Another invisible (and long overdue) upgrade to the naked eye is the stereo speakers setup. The first speaker is behind the earpiece grille, just like on a bunch of Huawei and iPhones. The other one is at the bottom, firing behind a completely new lattice. Samsung opted for (its own) AKG by Harman speakers with Dolby Atmos support. We'll see how it fares against the old one later on. 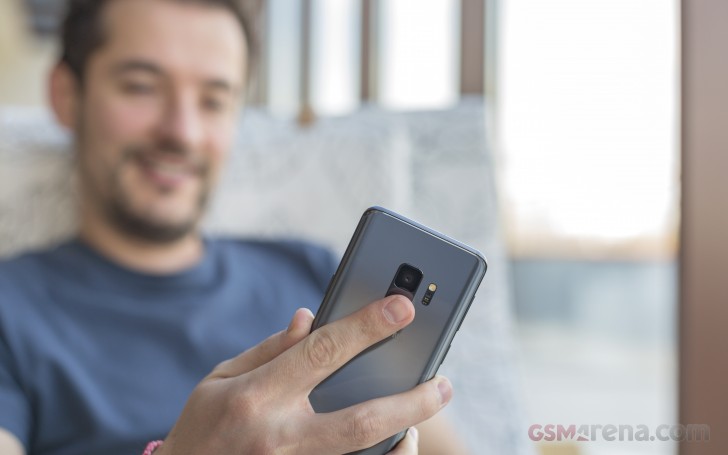 The Galaxy S9 is available in 64, 128, and 256 GB versions - all of those boasting a microSD slot just in case. The Dual-SIM models will rely on a hybrid slot, but it's still better than not having an expansion slot.

Midnight Black, Coral Blue, Lilac Purple, Titanium Grey are all the colour options you can choose from and it's a tough choice, we can assure you.

The Galaxy S9 is slippery, as you can expect from a glass smartphone, but beauty has always come at a price. The S9 is grippier than the S8, which is quite the achievement, premium as ever, and still a real pleasure to hold. But to keep this beauty fresh, you would have to clean it from smudges every now and then.