The Galaxy S9+ is incredibly fast, as it should be given the hardware inside. It remains fast no matter what you do. And, amazingly for a Samsung device, we've encountered almost no stutters or lags throughout our use - with the sole exception of the Bixby Home panel in the launcher, which we've discussed in the Software section.

In our time with the phone, performance didn't show any signs of degrading. We didn't feel it slowing down, and we didn't need to reboot it in order to make things go faster. We didn't employ the 'fixes' suggested by the Device Maintenance section in Settings, nor did we switch Performance mode from its default of Optimized.

Device Maintenance has some neat options, like freezing apps that crash a lot (they will be unfrozen once you use them again), or freeing up internal storage, but it also performs useless tasks like closing background apps in order to free up RAM. RAM is meant to be used, and if you keep 5 of your 6GB free at all times, you're basically working with 1GB of memory. Why would anyone want to do that?

Also note that we kept the McAfee antivirus (known as Device Security in the menu) off at all times, since such apps are mostly useless on Android anyway. In fact, they may make your experience of using the phone actively worse, with all the scanning going on. As long as you avoid installing obscure apps, and you download stuff only from the Play Store, there's a big chance that you will never, ever need antivirus software on your phone.

After so much talk about smoothness in all previous long-term reviews, we finally decided to make it an independent section. Yes, we shall once again compare the phone we're currently reviewing to a Pixel in terms of 'smoothness' - that very hard to define concept that has to do not only with actual UI speed, but also how reliably it is delivered, and with how many hiccups.

As we've said before, 'smoothness' is tough to define but easy to grasp as a concept once you've compared a Pixel to any other Android smartphone, preferably by performing the same tasks on both at the same time, with one device in each hand. 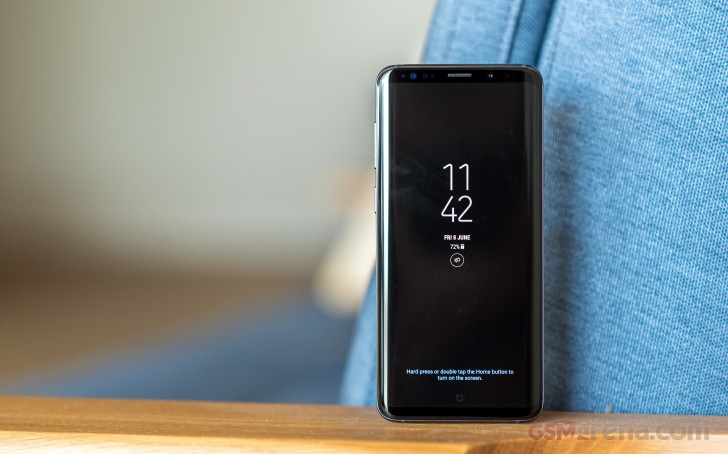 The Galaxy S9+ is by far the smoothest smartphone Samsung has ever made. It is in fact much smoother than even the Galaxy Note8, released less than a year ago. Whether this has to do with the hardware employed or under-the-hood tweaks we'll never know. Maybe the Korean company has finally decided to take this more seriously, after years and years of feedback from people who weren't happy with seeing lag and stuttering everywhere in their very expensive new flagship.

Regardless of why it happened, it did. The S9+ is still nowhere near a Pixel in terms of smoothness, but it is getting close. Not as close as the Sony Xperia XZ2, which was the subject of our previous long-term review, but closer than any Samsung ever, and closer than LG's V30S ThinQ (another long-term review subject), for what it's worth.

We've been using the Exynos-powered model for this long-term review, which is an important thing to note as there's also a Snapdragon-endowed S9+ on sale in some territories.

Battery life has been good overall, but rather inconsistent. Our typical use involves 14-17 hours off the charger on any given day, with most of those spent on Wi-Fi, a couple hours using mobile data, and a couple hours of streaming music via Bluetooth. The best Screen-on time we managed to squeeze out of the S9+ was 6 hours and 50 minutes going from 100% to 4% battery capacity, and without using any of the Battery saver modes.

Our screen on time record

That seems impressive, but we've only achieved something like this once. The average screen on time was between 4 and 5 hours. That's certainly decent, but nothing to write home about, especially when you consider that those numbers will surely go down if you're mostly connected to mobile data or use the screen outdoors in bright lighting conditions. If on top of that you add possible reception issues in your area, things will be looking even worse.

So depending on your specific use case, you may find that you need to charge the S9+ even before your day is over. Thankfully though, it supports wireless charging - if you have some of those pads lying around you can just place it on one when you're not using it.

Also, if your unit isn't lasting as long as you'd like it to, there are two power saving modes you can try, that should extend the phone's endurance.

Additionally, the App power monitor will tell you when any installed app is excessively using the battery in the background, and offer to put it to sleep. That means it may not receive updates or show you notifications, but it will wake up as soon as you start it up again. There's also an automated setting that puts any app to sleep if it hasn't been used for a specific time threshold, which by default is 3 days.