Samsung Galaxy S3 will launch in Blue and White

We received an anonymous tip that the Carphone Warehouse inventory system lists the Samsung Galaxy S3 in two color versions. In other Galaxy S3 news, Unwire HK got their hands on a screen protector meant for the upcoming Samsung Android flagship, which reveals its screen size.

The snap from the inventory system of the large retailer Carphone Warehouse suggests that the Galaxy S3 will be available in two colors at launch - Blue and White. Has Samsung abandoned its typical black color? 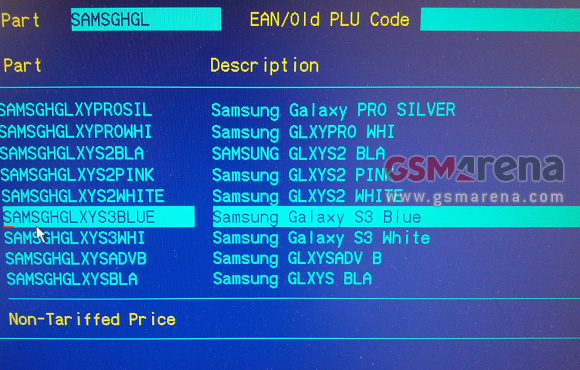 Most probably not, the Samsung Galaxy Note for AT&T is available in Carbon Blue and Ceramic White, but if you look at the photos from our review you'll see that the blue color is actually so deep that it's almost black. You can only see a blue tint under specific lighting there and we guess it will be the same with the S 3.

As for the screen protector - it's really hard to measure screen diagonal on one, as it's designed to protect the whole front of the device, not just the screen. But since it turned out too big for an HTC One X (with a 4.7" screen), the 4.8" rumor for the Samsung Galaxy S3 seems to be the correct one, if the protector manufacturer is to be believed.

i think it is cool but the price is very high.i got other options like nokia lumia800 no matter the price is little high compared to samsung coz its worth it, becoz of its shape and look its cool than samsung.we will see the sales.best of luck ...

android jelly bean update may come up for galaxy s3. This is what the report suggests:http://www.androidust.com/galaxy-s3-gets-ram-update-courtesy-jelly-bean-4-1/