The Samsung Galaxy S Advance runs Gingerbread 2.3.6 with the most recent TouchWiz 4.0 launcher. From a software standpoint, you're looking at an interface almost identical to that of the Galaxy R.

Take a look at our video of the device in action.

The lockscreen is the same as ever-swiping in any direction will give you access to the phone. The cool feature where missed events (messages, calls etc) get their own unlock patterns is still here too.

The lockscreen can be removed by swiping in any direction

The homescreen accommodates tons of widgets with lots of functionality. You can have up to 7 homescreens. A pinch zoom brings you to an aggregate view of all homescreen panes, which can be edited: rearranged, deleted or added.

The numbered dots that identify the homescreen panels serve as a scroll bar too. A press and hold on the dots lets you scroll sideways through the resized images of the available homescreen panes in one short go rather than with several swipes.

If you prefer, you can choose List view instead of the default Grid view.

In typical TouchWiz fashion, there are four shortcuts docked at the bottom of the screen that are visible both on the homescreen and in the app launcher. You can swap the first three with different ones (by default the shortcuts are Phone, Contacts, Messaging). The rightmost is the app drawer/home shortcut used to toggle between the apps menu and the homescreen, so it makes sense to always keep it in the same place.

With the Samsung Galaxy S Advance you get a standard Android task switcher but with one modification - it has a button to launch a task manager.

The custom task manager which Samsung have preinstalled offers a lot of functionality. It also comes with a handy widget which shows you the number of active applications right on your homescreen.

The task manager and its widget

The Samsung I9070 Galaxy S Advance uses an ST-Ericsson NovaThor processor with two 1 GHz Cortex-A9 cores, Exynos's Mali-400MP GPU and 768 MB RAM. It's enough to rival the best in dual-core smarts out there.

The first benchmark is BrowserMark tests HTML5 and JavaScript performance and the Samsung Galaxy S Advance came on top here, beating the Galaxy S II by quite a lot. 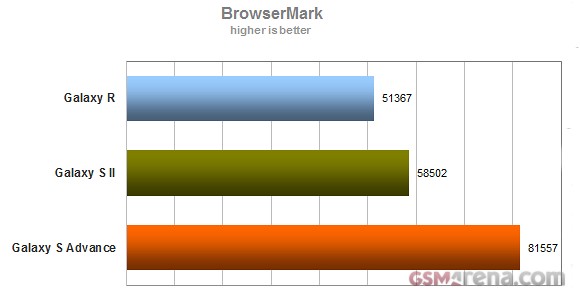 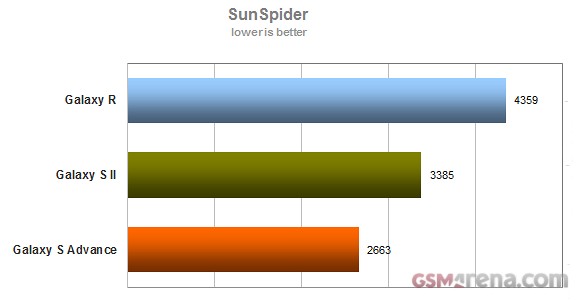 BenchmarkPi is all about processor calculation speeds. The newer processor architecture in the Exynos proves itself here tramping both the Tegra 2 and NovaThor. 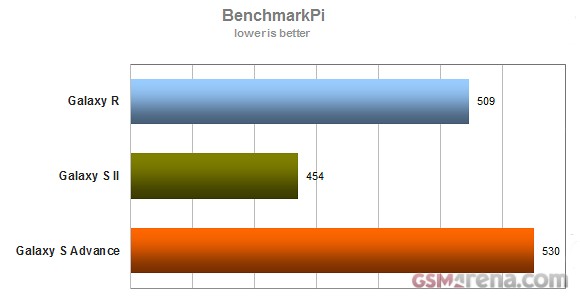 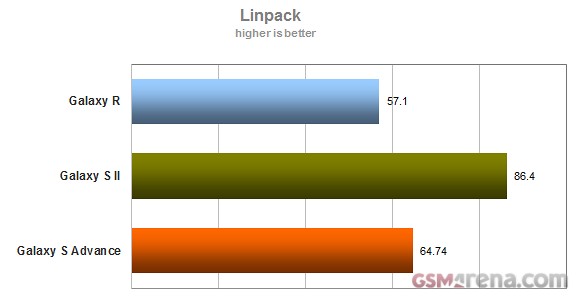