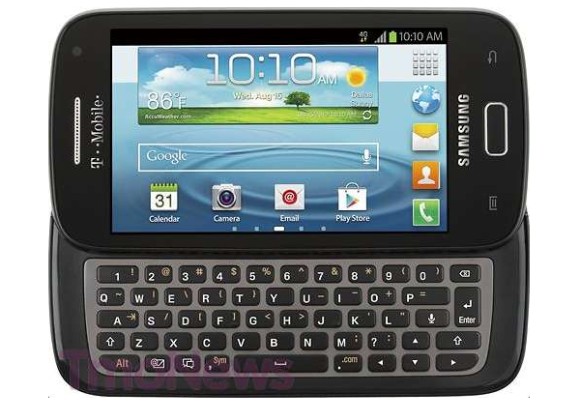 The Samsung Galaxy S Blaze Q appears to essentially be a US Galaxy S III with added five-row, slide-out QWERTY keyboard, save for its ridiculous name selection. Its rumored specs include a dual-core Snapdragon S4 CPU, a gig of RAM, 16GB of built-in memory, 720p display, and Android ICS. Naturally, T-Mobile's speedy 42Mbps HSPA+ network will be present as well.

Since we're talking rumors, use the usual pinch of salt when processing the above information. As always, we'll tell you more when we know more.

So Many quality comments, had a HTC TP2 that died earlier this year. RIP. so forced upgrade. my choice SGS3. great phone but not using it as much as i did my tp2. why! no keyboard. gets so painfull correcting text end up using my laptop instead. al...

This looks ve®y similar to the HTC touch pro 2. http://m.gsmarena.com/htc_touch_pro2-pictures-2690.php