The Samsung Duos line has been slowly working up the ranks to finally cross paths with the Galaxy S line. It's obviously not the kind of collision to create a big bang but we're still pretty excited about the exchange of DNA.

Honestly, if it takes nothing less than a Samsung Galaxy S III to light your candle, there's little to see here. Dual-SIM phones are in a niche of their own and usually keep a safe distance from flagships, old and new. And no, the Galaxy S Duos hasn't crossed any lines but dares to do things a little differently. 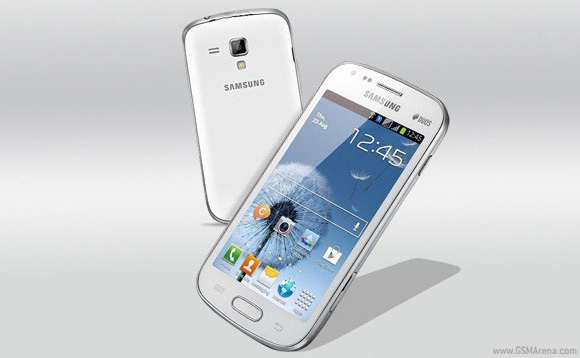 The Galaxy S Duos could easily pass for a Galaxy S III mini. It too runs the revamped version of TouchWiz dubbed Nature UX. It has two fully-functioning SIM slots, a 1GHz single-core processor and 768 MB of RAM. For a, hopefully, reasonable price you will also get a decent 4"WVGA screen and a 5MP still camera. Here's what else the Galaxy S Duos offers.

Good looks and Ice-cream Sandwich are major points in favor of the Galaxy S Duos. It is clearly better than the Ace Duos in every way possible and will certainly cost a lot more. It would be a huge surprise for a dual-SIM smartphone to outsell a typical midrange droid and the Galaxy S Duos won't even be trying. But it's might be able to change the users' perception of dual-SIM phones and probably spur new demand.

Frequent travelers and people looking to get the best out of multiple carrier plans are not after the ultimate in processing power or eye-popping screen resolution and the Galaxy S Duos is OK with that. It's offering reasonable equipment and good looks, on top of being able to handle two SIM cards.

That's not a bad start for a phone that wants to do well in the midrange but we always like to have a closer look. Next stop is hardware and you're more than welcome to join us.

Y is that i cant make calls gets disconnected automatic

Good but due to low space RAM mobile running slowly with the cost of Rs.9600