The Galaxy S Duos is fairly compact and quite pleasant to hold. At 121.5 x 63.1 x 10.5 mm it's barely bigger than an Ace 2 while featuring a bigger, 4" screen. The all-plastic device is very well put together and weighs the acceptable 120 g.

In many ways the Samsung Galaxy S Duos resembles the current Samsung flagship, the Galaxy S III. It's not as tall and not as thin of course, but the general aesthetics are undoubtedly influenced by the nature-inspired design of the S III.

The Galaxy S Duos is a lot more subtle than its prominent sibling, most of which is down to the compact size. The good thing is it doesn't look like a cheap replica - far from it. In fact, the Galaxy S Duos is more sensible with the finish and does well without the high-gloss of the S III.

Compared to the Galaxy S III

The display on the Galaxy S Duos is a 4" TFT unit of 480 x 800 resolution, resulting in a density of approximately 233 pixels per inch. Those are some pretty good specs, considering the class of the smartphone.

Colors and contrast are good but the unit is too reflective (as seen by the sunlight legibility score). Also the S Duos doesn't offer an automatic brightness setting as it lacks an ambient light sensor.

Here go the Samsung Galaxy S Duos results from our display tests. To find more about the testing routines follow this link. 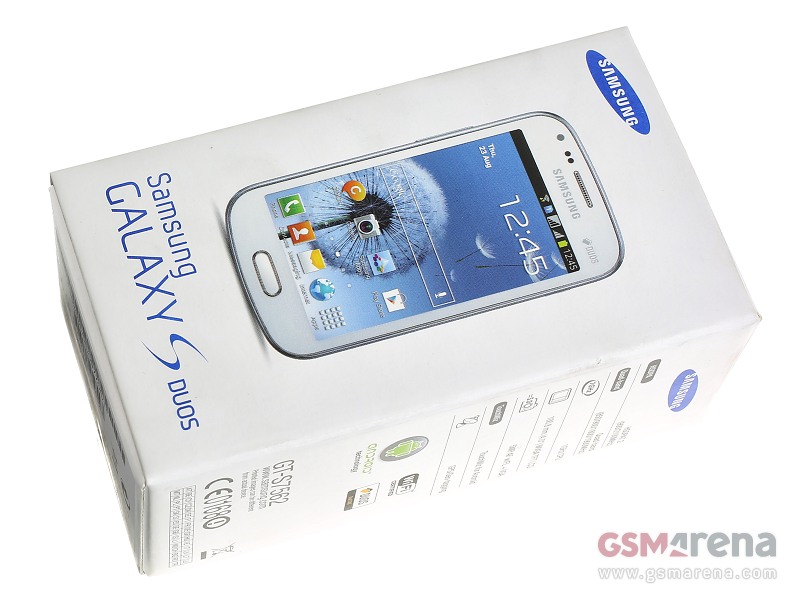 The display under a microscope

Looked from the front, the Samsung Galaxy S Duos looks like a high-end or at least an upper midrange device, with the thin bezel and nicely lookingwhite paintjob working well in its favor. Above the 4" WVGA (480 x 800 pixels) screen there's a VGA camera and a proximity sensor. There isn't an ambient light sensor.

Below the screen is the familiar three-button combo - a hardware home button in the middle with two capacitive keys on either side for Menu and Back.

A silver frame runs all around the phone's front. The right side of the phone features the power button and the hot-swappable microSD card slot with a protective cap.

On the left side you'll find only the volume rocker and a lanyard eyelet.

The 3.5 mm headphone jack is placed at the top of the device.

The 3.5 mm headphones jack at the top

The primary 5 MP camera of the Samsung Galaxy S Duos comes with a single LED flash. There's also a loudspeaker grille at the back. The battery cover has a delicate rubbery feel to it for an excellent feel in hand.

On the back of the Galaxy S Duos

A double-slotted SIM compartment is ready to accommodate the two regular SIM cards - unlike the Galaxy Ace Duos, you don't need to remove the battery to reach the SIM cards. Of course, changing SIMs requires a reboot anyway. Nokia's sound-mounted hot-swappable SIM slot is by far a more comfortable solution. An ample 1500 mAh battery powers the phone.

The SIMs slot, battery cover off

Overall, the handling of the Samsung Galaxy S Duos is a very pleasant experience. Nicely curved and very sensibly finished, the phone fits comfortably in the hand and easily fits inside a pocket.

We like the Galaxy S Duos - it's well-built and good looking. Borrowing the premium design of the Galaxy S III was risky but it was done quite tastefully. The Duos is elegant without being overdone - we wouldn't be surprised if some people find it as attractive as the flagship Galaxy S III.

Now, on to software where ICS will hopefully help the Galaxy S Duos keep up the good impression.