Samsung will probably make the Galaxy S Duos 3 official very soon, at least for the Indian market. That's because this device is already in stock at one Mumbai-based shop.

This is the same outlet that leaked the existence of the Galaxy Ace NXT days before its official introduction, so history may be repeating itself in this case. 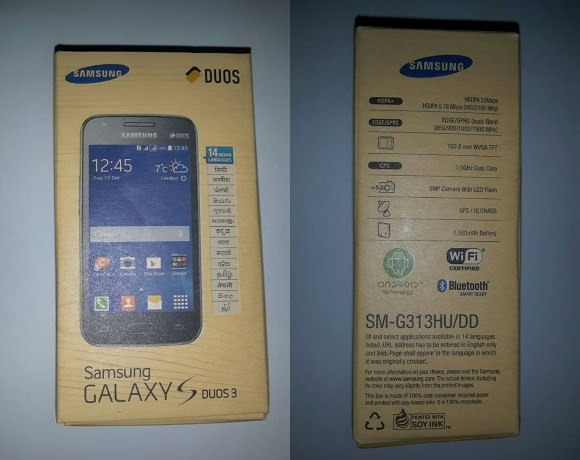 And in a rather strange twist, the new Galaxy S Duos 3 has almost the exact same model number as the aforementioned Ace NXT. The new handset is thus the SM-G313HU, while the Galaxy Ace NXT is also known as the SM-G313H.

That hints at the specs of the two SKUs being similar, and they are. Still, why Samsung chose to only append a new letter to the NXT's model number for the Galaxy S Duos 3 remains a mystery.

The new dual-SIM smartphone comes with a 4-inch touchscreen that has 480x800 resolution, a 5 MP rear camera with LED flash, a VGA front camera, and an FM radio.

It's powered by an unnamed 1 GHz dual-core CPU, aided by just 512MB of RAM. Internal storage is 4GB (of which 2.1GB is user accessible), though that should be expandable via microSD.

Compared to the Galaxy Ace NXT, the Galaxy S Duos 3 has a higher-res rear camera, and one extra processor core (though it is clocked a bit lower).

yes such a good phone in Samsung

This mobile is very poor s duos 2 the best