Retail package as basic as it gets

The Samsung Galaxy S Duos comes in an averagely-sized retail package, whose contents fail to impress. This is probably the least accessorized of any European smartphones we have reviewed recently, not even having a headset.

All you get is a charger and a USB cable for tethering your Galaxy S Duos to your computer. The only good news is that the charger has its own wiring and doesn't need the USB cable, so you can keep one at home and the other at your office.

Of course, you should keep in mind that retail package contents are market-dependent, so you may get a better deal than us.

The Galaxy S Duos is fairly compact and quite pleasant to hold. At 121.5 x 63.1 x 10.5 mm it's barely bigger than an Ace 2 while featuring a bigger, 4" screen. The all-plastic device is very well put together and weighs the acceptable 120 g.

In many ways, the Samsung Galaxy S Duos resembles the current Samsung flagship, the Galaxy S III. It's not as tall and not as thin of course, but the general aesthetics are undoubtedly influenced by the nature-inspired design of the S III.

The Galaxy S Duos is a lot more subtle than its prominent sibling, most of which is down to the compact size. The good thing is it doesn't look like a cheap replica - far from it. In fact, the Galaxy S Duos is more sensible with the finish and does well without the high-gloss of the S III.

Compared to the Galaxy S III

Looked from the front, the Samsung Galaxy S Duos looks like a high-end or at least an upper midrange device, with the thin bezel and white paintjob working well in its favor. Above the 4" WVGA (480 x 800 pixels) screen there's a VGA camera and a proximity sensor. There isn't an ambient light sensor.

Below the screen is the familiar three-button combo - a hardware home button in the middle with two capacitive keys on either side for Menu and Back. The latter have a dedicated setting for the backlight duration but no haptic feedback.

A silver frame runs all around the phone's front. The right side of the phone features the power button and the hot-swappable microSD card slot with a protective cap.

On the left side you'll find only the volume rocker and a lanyard eyelet.

The 3.5 mm headphone jack is placed at the top of the device.

The 3.5 mm headphones jack at the top

The primary 5 MP camera of the Samsung Galaxy S Duos comes with a single LED flash. There's also a loudspeaker grille at the back. The battery cover has a delicate rubbery feel to it for an excellent feel in hand.

On the back of the Galaxy S Duos

Remove the cover and you are greeted by a double-slotted SIM compartment, which is ready to accommodate the two regular SIM cards. Unlike the Galaxy Ace Duos, you don't need to remove the battery to reach the SIM cards, but changing SIMs still requires a reboot. Nokia's side-mounted hot-swappable SIM slot is by far a more comfortable solution.

Our own battery tests show that the S Duos lasts about 8 and a half hours of talking on a 3G network. It's also good for 5 hours and 23 minutes of web browsing (over Wi-Fi) and 4 and half hours of watching videos. The endurance rating - how long you can go between charges if you do an hour each of calling, web browsing and watching videos every day - works out to 43 hours. 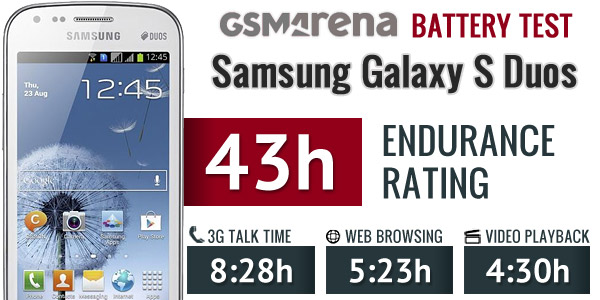 You can read more about the battery life of the Galaxy S Duos over here and more about our testing procedure here.