The Samsung Galaxy S Duos comes with the default ICS Gallery. It opens up in Albums view, which is what we're used to seeing - it lists all folders with photos in the phone. Rather than the familiar stacks, the app uses a grid of photos, two on a line.

Besides, Album view, photos are sorted by Location, Time, Person (photos with tagged faces) and Group.

When viewing a single photo, you'll find several sharing shortcuts and a delete button above the photo, while below is a line of small thumbnails of all other photos in the album. You can tap those small thumbnails to move to other images or you can just swipe to the side.

The Gallery also supports highly customizable slideshows with several effects to choose from, customizable music and speed. You can also highlight specific images to be included in the slideshow.

The slideshow option is highly customizable

The Samsung Galaxy S Duos uses an updated version of the TouchWiz music player. Samsung has enabled equalizer presets (including a custom one) along with the sound-enhancing SoundAlive technology, which features 7.1 channel virtualization. Samsung uses SoundAlive in some of their MP3 and Android-powered media players.

Samsung have put a lite version of the video player from its flagship Galaxy S III onto the Galaxy S Duos. As a result, the device has easily one of the best video players around and is packed with various options.

The grid view, unlike the Galaxy S III, doesn't have the live thumbnails, as the S Duos lacks the brute quad-core power needed to support them. Instead, Samsung has replaced them with statics thumbnails, which do the job just fine.

The video player lets you squeeze out the best viewing experience from the large, high-res screen. You can adjust video brightness, color tone and enable outdoor visibility too.

The video player had absolutely no trouble with any of the files we threw at it - starting with .WMV, through .AVI (DivX and XviD) and .MP4 to .MKV (H.264). The latter had some problems playing files with HD and full HD resolutions, though.

The Samsung Galaxy S Duos also made a good impression when it offered a list of subtitles and let us pick. Most players look for a file with the exact same name as the video file (save for the extension), which means quite often you have to rename the subtitle file to match the video file just so that the player will show you subtitles.

The Samsung Galaxy S Duos is equipped with an FM radio with RDS too. The interface is simple - there's a tuning dial and you can save as many as 8 stations as favorites. You can also listen on the loudspeaker, but the headset is still needed as it acts as the antenna. You can record radio broadcasts as well.

The Samsung Galaxy S Duos did decently well in our audio quality test. It's by far not the most talented musician around but, it should still please everyone, but the most demanding audiophiles.

The Galaxy S Duos got some pretty good scores in the active external amplifier part of our test. The only two weak points of its performance were the cut-off extreme bass frequencies and the slightly higher than average intermodulation distortion. The rest of the readings were quite good, while the volume levels were about average.

There is relatively little degradation when headphones come into play. The stereo crosstalk spikes and the intermodulation distortion rises a bit, but that's about it. 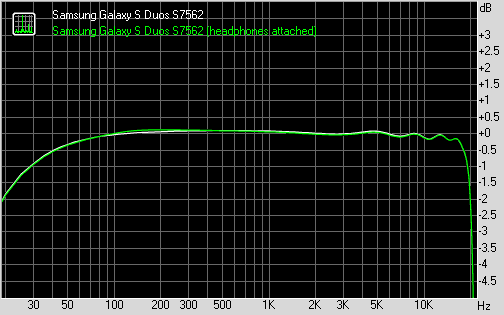