The web browser is pretty much the same (the only two new UI additions are the previous and next page buttons), but you'll notice something missing - Flash support. Adobe is no longer supporting Flash on the Android platform and has even removed the Flash app from the Play Store for people who want to install it as an extra.

Luckily, you can always try and side-load the Jelly Bean-compatible APK that the guys over at XDA-Developers cooked up.

Often firmware updates bring about some camera improvements too. However, since the Galaxy S III camera was an excellent performer, we didn't expect Samsung to try and repair something that was working just fine.

And we were right - there are no camera UI changes, nor are there improvements in the quality of the images or videos taken.

Here are a few sample shots to see for yourselves.

And here are the 1080p resolution chart videos to check the comparable video quality. 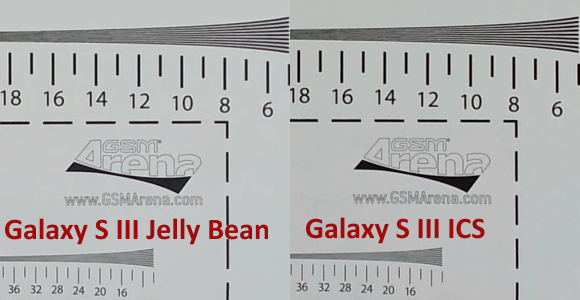 You can compare these two screenshots from the above video samples.

Offline voice typing premieres with the Jelly Bean update. You can download additional languages (about 20MB per language pack) and use voice recognition without an internet connection. This way you are not only saving on your data connection, but the input is also operating faster as it's not dependent on the network speeds. We were also pleased to find out that the transition hasn't cost it anything in terms of accuracy either.

Another updated feature is the pop-up video playback. It's the awesome trick introduced on the Galaxy S III that brings the video you are currently playing to a small floating window that lies on top of whatever else you currently had open. The new firmware allows you to resize this pop-up window for even further customization.

The Jelly Bean update replaces the S Memo app with a newer one called S Note lite - which you've probably seen in the Note II demos. It exactly the same thing that S Memo did before, but adds a few new features, such as the ability to record sounds and attach them to the note directly. You can also add most of the common multimedia formats quite easily.

There is no question the Jelly Bean update represents a major step forward for the Galaxy S III. It brings a bunch of improvements, optimizations and cool new features, which while not exactly crucial to the user experience are quite nice to have. Samsung deserves some credit for not only bringing the update in a timely manner, but also making the transition pretty smooth. There are no bugs or some newly introduced UI glitches to worry about - you just get to enjoy the novelties without distractions.

More importantly it will allow the Samsung Galaxy S III to extend its advantage over its quad-core rivals, which are yet to receive the latest version of Android. The jump from ICS to Jelly Bean isn't that big to alone make you chose one smartphone powerhouse over the other, but the Samsung flagship was doing quite well even before it had that extra edge.

To put it simply - we really love the Jelly Bean-powered Samsung Galaxy S III and once the official update arrives, we can't look beyond it for the best smartphone out there. Until the others catch up, that is.