We can expect the Samsung Galaxy S III sometime in 2012, if we are to believe what the photo below has to offer. The image in question not only tells us when, but what we can expect from the yet to be announced Samsung flagship.

In a slide detailing the progression of the Galaxy S family, the III sits in the top right, and next to it a juicy specs list follows. 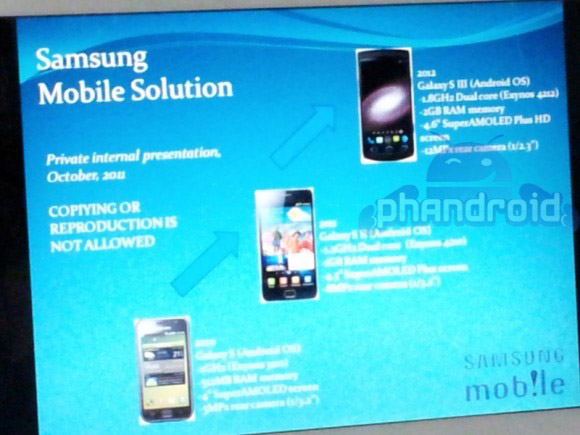 Supposedly the Galaxy S III will bring to the table a Exynos 4212 1.8 GHz dual core (sorry not quad core just yet) processor, twinned with 2GBs of RAM. There's also a 4.6 inch Super AMOLED HD display that will provide HD resolution without the PenTile technology found in the current Samsung screens and to finish the list off, the upcoming S will supposedly have a whopping 12MP camera utilizing a W750 BSI CMOS sensor for image control.

The tipster who passed all this information on also mentioned a few other goodies, such as LTE and NFC support (which will tie in nicely with Google Wallet) as well as a flat display, more in line with the Galaxy S family and not as some suspected, akin to the upcoming Nexus Prime. Interestingly enough, the S III will also apparently include the four typical Android buttons, despite a 99% certainty that it will be running the latest Ice Cream Sandwich build of Google's mobile OS.

Now as a disclaimer to any leaked content we find floating about the internets, there are a number of things to increase the illegitamacy of this leak. For one, spelling errors are rife on the slide, alongside the original Galaxy S being misquoted to have run a Exynos chipset of its own. It also doesn't correlate entirely with the 4Chan specs of the Galaxy S III but there are some similarities.

It's probable that we'll get a display size of around 4.6 inches, a dual core nearing the 2GHz mark, a rear camera dipping into double digit megapixels and NFC support, but beyond that don't take what we're showing here as gospel, just a taste of things to come.

want a large Samsung S3,at least 5.3...it looks sexy and manly..Dont know about you girls..lolol..

Samsung ,today ,has announced their own chipset 5250 (32nm) which which run dual- cores clocked at 2ghz .please don't put 4210 ,as Qualcomm and nvidia already announced thier chipset snapdragon s4 and tegra 3 respectively so htc ville and zeta may be...