Having a retail box, which is free of carrier branding is a big deal in the United States - up until now, it has been a privilege reserved only for Apple's iPhone.

Well, that's the case with the Samsung Galaxy S III. The box contains all the basic accessories, required for everyday use of the smartphone. There's the microUSB data cable, which couples with the wall-mount charger or is used for charging off a computer connection and file transfers. Also, you get a single-piece headset of reasonable, if unspectacular, looks and that's it.

There's no microSD card supplied (though with 16GB of internal memory you still get adequate storage out of the box). There's no TV-out adapter either or any other extra value accessories. This might be disappointing for a flagship device, but the Galaxy S III's direct rivals don't offer much more than that, so we won't be deducing any points here.

At 136.6 x 70.6 x 8.6 mm, the Samsung Galaxy S III is certainly not the most compact smartphone around, but you could hardly expect anything better with a 4.8" screen. In fact, Samsung engineers deserve credit for fitting such a massive display in a chassis, which is a mere 4.5mm wider and just over a centimeter taller than its predecessor. The handset isn't too heavy either - 134g sound more than acceptable given its size and, while it will certainly be felt in your pocket, it is by no means a burden.

Finally, the US version of the Samsung Galaxy S III has taken after the looks of its international sibling - a sharp departure than last year's state of affairs when there were a few too many Galaxy S II incarnations.

We were less than impressed with the Samsung Galaxy S III on those first official photos. The fact that it borrowed design ideas from the last two Nexus smartphones instead of building on the sleekness of the S II was generally met with frowns around the office.

However, once we held the device in our hands, we realized that its design is actually not too bad. For one, the materials used look better in person than they do on photos and the sturdy build helps a lot too. Then there's the impressively slim waistline, which really adds to the general appeal of the device.

And yes, we still feel the glossy finish is a questionable choice as it lacks the high-end vibe that a smartphone of this caliber deserves. However, the Samsung Hyperglaze coating makes sure the S III doesn't look like a budget handset in real life as the press photos suggested.

Hyperglaze means that there's another, see-through layer of plastic on top of the back panel - similar to what we saw on the Meizu MX. This layer helps mask some of the fingerprints and is actually decently grippy.

The 4.8" Super AMOLED of HD resolution is where the Samsung Galaxy S III magic happens. The image quality is every bit as impressive as its specs suggest - tack sharp and with perfectly deep blacks, it's probably the best you can find on the market.

The display is phenomenal

The colors are nicely saturated by default, but the display settings menu offers a choice between four different modes, so you can opt for more natural colors as well. We did prefer the livelier dynamic and standard modes, but the natural and movie modes will probably have their fans too. What's important here is that the S III display offers a level of flexibility that no other screen on the market can provide.

The viewing angles are extremely wide too - there's some color loss when you reach the extremes, but the icons and text remain almost perfectly clear, giving that printed look that we love so much.

In case you were worried about the PenTile matrix that the Galaxy S III employs - well, don't be. You'd need to be looking from such close range that your eyes will hurt before you notice any pixelization. It's plain to see that the HD PenTile screen of the S III is sharper than the RGB WVGA unit on the Galaxy S II, despite the increased screen size. It's just that at these ppi levels the differences are extremely hard to spot, so PenTile is nothing to be worried about.

And here's how the Samsung Galaxy S III did in our dedicated display test. You can learn more about the testing process over here.


Below the display you get the same three keys as on the international version of the Galaxy S III - capacitive Menu and Back buttons and a regular press Home key.

The three key combo under the screen

The usual extra functionality upon a long press is enabled - the Menu key handles Google search on the device, while the Home key brings up the task switcher. And if you click the home key twice the voice control kicks in.

Above the display we have the earpiece, as well as ambient light and proximity sensors. There's also a 2 megapixel front-facing camera for video-calls and a status LED up there.

There's quite a lot going on around the earpiece

The left side of the Samsung Galaxy S III features the volume rocker.

The volume rocker sits on the left

Unfortunately, all there is on the right is the power key. Once again Samsung is releasing its flagship droid without a dedicated camera key.

There's no camera key on the right

The top of the Galaxy S III hosts the 3.5mm audio jack and one of the microphones. The is a also a tiny Qualcomm sticker there, which is the only visual suggestion that the US Galaxy S III packs different internals from the I9300.

The secondary microphone is alongside the 3.5mm audio jack on top

The microUSB port at the bottom is used for both data connections and charging. Not only does it support USB host but it also comes with MHL, enabling HD TV-out connectivity. You'll have to purchase an adapter to use that extra functionality, though. The other thing of interest here is the mouthpiece.

The main mic is next to the MHL-enabled microUSB port

The back of the Samsung Galaxy S III is where the 8 megapixel FullHD-capable camera lens is located. It's flanked by an LED flash and the loudspeaker grille. You also get a Galaxy S III logo on the back, as well as one from the carrier which offers the device.

The US version of the Samsung Galaxy S III achieved the impressive endurance rating of 40 in our battery test. This means that you will need to recharge your handset every 40 hours if you use it for an hour each of telephony, web browsing, and video playback every day. 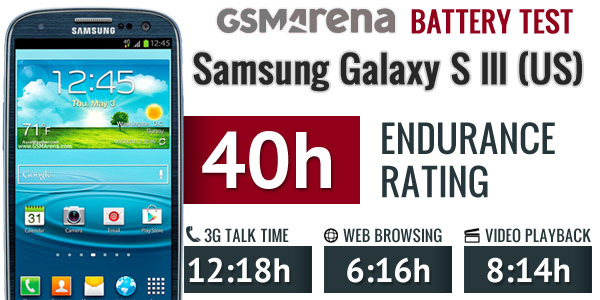 As you can notice above, the telephony, web browsing and video playback times are quite impressive. It is the standby performance of the Galaxy S III's battery which was a minor letdown. Keep in mind however that this particular element will likely be depending on the network the device is connected to.

Another positive side is that the Samsung Galaxy S III is extremely easy to handle. The handset's designers have somehow made it in such a way, that even a one-hand operation is possible. For a device with a 4.8 screen, that's downright impressive.

Handling the handset is surprisingly easy

Overall, we'd give excellent marks to the Galaxy S III on the build quality and perhaps a B+ on looks. The exceptional screen is the real star of the show though, no doubt about that.