The Samsung Galaxy S III comes with the default ICS Gallery. It opens up in Albums view, which is what we're used to seeing - it lists all folders with photos in the phone. Rather than the familiar stacks, the app uses a grid of photos, two on a line.

Besides, Album view, photos are sorted by Location, Time, Person (photos with tagged faces) and Group.

When viewing a single photo, you'll find several sharing shortcuts and a delete button above the photo, while below is a line of small thumbnails of all other photos in the album. You can tap those small thumbnails to move to other images or you can just swipe to the side.

The Gallery also supports highly customizable slideshows with several effects to choose from, customizable music and speed. You can also highlight specific images to be included in the slideshow.

The slideshow option is highly customizable

When viewing a photo with people's faces visible in it, the Galaxy S III will try to detect them automatically (and you can manually highlight faces where it fails). Buddy photo share will use your contacts' profiles to try and recognize who is who automatically.

The Samsung Galaxy S III uses an updated version of the TouchWiz music player. Samsung has enabled equalizer presets (including a custom one) along with the sound-enhancing SoundAlive technology, which features 7.1 channel virtualization. Samsung uses SoundAlive in some of their MP3 and Android-powered media players.

The Galaxy S III player is DLNA-enabled, so you're not limited to tracks on your handset - songs on devices connected to your Wi-Fi network are as easy to get to as locally stored songs.

Samsung have put what is easily the best default video player on the Samsung Galaxy S III. It offers several view modes - grid, list, folders and nearby devices (which accesses DLNA devices).

The grid view is our favorite as it is a true tour de force - the visible video thumbnails (all eight of them) are actually playing the videos instead of being static images. They play at a reduced framerate, but it's an awesome preview and it shows what can be done when you have processing power to spare.

The video player lets you squeeze out the best viewing experience from the large, high-res screen. You can adjust video brightness, color tone and enable outdoor visibility too.

Another cool feature that showcases the power of the phone's chipset is the chapter preview - it detects chapters in the video and shows a rectangular grid, with live thumbnails (just like the grid view above).

The video player had absolutely no trouble with any of the files we threw at it - starting with .WMV, through .AVI (DivX and XviD) and .MP4 to .MKV (H.264). Resolution wasn't a problem either - the Samsung Galaxy S III played FullHD files. Large files worked seamlessly.

The Samsung Galaxy S III also made a good impression when it offered a list of subtitles and let us pick. Most players look for a file with the exact same name as the video file (save for the extension), which means quite often you have to rename the subtitle file to match the video file just so that the player will show you subtitles.

The video player on the S III has a feature called Pop up play - it moves the video in a small floating window and you can use other apps on the phone while still watching the video. It's the only such feature on the phone, there aren't any floating mini apps like Samsung's tablets have.

Pop up play in action

After the brain transplant required for the Samsung Galaxy S III to jump the big pond, the smartphone audio output has become louder, but isn't as clear as on the international version.

This makes the US Samsung Galaxy S III one of the louder smartphones around and the good news is that it has still retained its spotless frequency response. The signal/noise ratio and dynamic range readings have deteriorated slightly, but they are still pretty great and so are the distortion levels. Some extra stereo crosstalk has crept in, but the score is hardly much to worry about.

Overall we'd give the nod to the international Galaxy S III as the slightly more talented musician, but if you like to keep your volume to the maximum levels you might be better off with the US version. 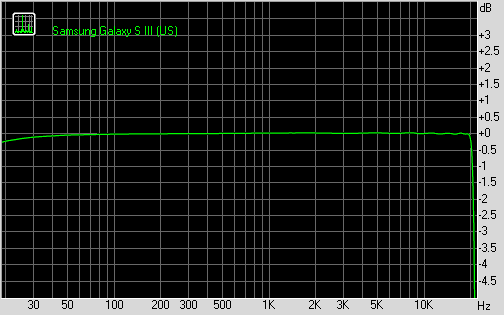