There's also the bitrate to take into account. The HTC One X videos come out with a relatively low bitrate of about 10 Mbps, while the Galaxy S III's clips hover around the 17 Mbps mark. Both devices offer stereo sound recording during capture. Below we've lined up 720p video samples by each of the devices.

The lower bitrate is evident here as well. At 6Mbps the One X videos have about half the bitrate of those captured with the Galaxy S III.

Both phones feature video stabilization, so we decided to test it out. We put both phones on a mount, which we held in the hand. The videos are shot simultaneously to make the comparison fair.

Galaxy S III videos look more stable - there's some noticeable wobble, but no shaking. One X videos are shaky even with the stabilization enabled. Differences between the two phones are easiest to spot noticeable in the parts of the videos where we try to hold them steady, while when we are doing some fast panning the two are performing identically.

Here's a composite of the videos shot with the Samsung Galaxy S III (left) and the HTC One X (right):

So far so good for the Galaxy S III, but there's an important consideration when using the video stabilization feature. It narrows the field of view (it's a side effect of how it works), so you can fit less in the scene with if you have stabilization enabled.

We shot our ISO chart from the same distance with both phones with the stabilization on and off to compare the FoV of the two in either scenario.

The Galaxy S III has a nice wide FoV with stabilization off, but that gets noticeably reduced when we flip the switch. As the difference between the modes on the One X is much, much smaller, the HTC flagship provides wider viewing angle on its stabilized videos than its Samsung competitor. 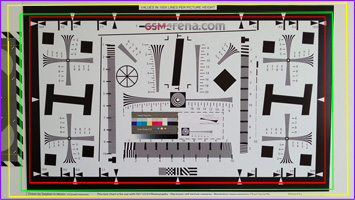 FoV comparison - Galaxy S III vs. One X with video stabilization OFF and ON

Overall, it's hard to see beyond the Samsung I9300 Galaxy S III for the winner in the video recording category. The One X shoots decent videos, but those are nowhere near the S III standard.

The Video quality compare tool is where you can observe how each of our contenders handles change in lighting, what actual resolution they achieve in FullHD recording and what levels of detail are produced.

The Galaxy S III has a clear resolution advantage in both the good light and the resolution chart frames. However, if you look at the low light video frames, you'll notice that the HTC One X once again puts its fast lens to good use and scores a point.