Samsung Galaxy S IV rumors pop up by the day and the last one comes from the relentless leak mill evleaks. What looks to be a Galaxy S IV presentation slide, containing an image of the smartphone popped on the famous Twitter account . 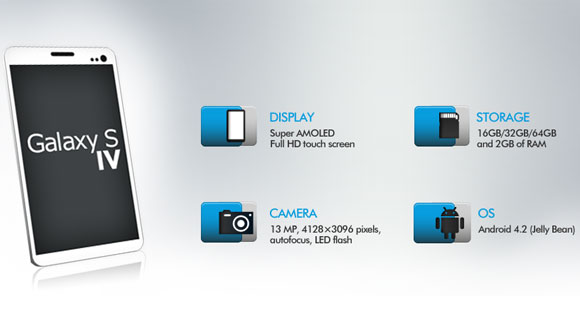 Although evleaks has proven its reliability numerous times in the past we remain dubious on this particular image's authenticity. The Galaxy S IV photo looks like a quick mockup rather than an actual product image.

Besides Samsung did quite well in hiding the face of the Galaxy S III until its official unveiling last year. We wouldn't be at all surprised if the image you see here is just a placeholder, and not the real deal.

As for the S IV's specs on the slide, they coincide with what the AnTuTu benchmark test showed yesterday.

There's little left until March 14, when the Galaxy S IV will shine on Times Square in New York, so we'll know all about it soon enough. You can check out the phone's teaser video released yesterday to make the wait easier to bear.

Update: It turns out the image comes from UK online retailer Expansys and not evleaks. In fact the tweet has since been removed, suggesting that it's very unlikely that this is the real thing. Move along, nothing to see here.

Someone tell me how to upload it