The Galaxy S Plus has the exact same friendly measurements of the original, in both size and weight. At 9.9mm thick and 119g of weight, the S Plus can still be considered compact even by today's standards.

The Plus suffix hasn’t brought anything extra to the bundle. There's the mini-sized charger, a microUSB cable and a nice looking, one-piece headset with a single button remote.

The Samsung I9001 Galaxy S Plus box contents

It should be noted that the Galaxy S Plus comes with 8GB of built-in memory, so not having a microSD card in the box is not a problem.

We imagine someone at Samsung took the blueprints for the I9000 Galaxy S, scratched out "Hummingbird chipset", wrote "Qualcomm MSM8255T" over it and handed it in as the I9001 Galaxy S Plus draft.

It takes a trained eye to tell the two apart. The silver strip around the phone's face has a lighter color in the Samsung Galaxy S Plus than in the original version and the pattern on the back is slightly different (less conspicuous, and perhaps more mature). Oh, and the "with Google" label is now gone.

Not that the Galaxy S and S Plus are not attractive gadgets, they are, but the design is already a year old. Also, there's no obvious way for others to tell that you have the newer, better model and not the old one.

Spot the differences: Samsung I9001 Galaxy S Plus and the original Galaxy S

The phone uses the same SuperAMOLED WVGA (800 x 480) display as the original. You get to enjoy excellent image quality and viewing angles on a 4” diagonal. The downside is it’s based on the old PenTile matrix with fewer subpixels than the updated SuperAMOLED Plus screens. But guess what, it’s still good enough by our books.

The same SuperAMOLED display as the original Galaxy S

It’s still a SAMOLED unit we’re talking about here, so the contrast ratio is theoretically infinite. This achievable in practice only in dark rooms, otherwise reflections from external light sources get in the way.

Anyway, the brightness is above average though not as bright as some LCDs or the AMOLED screen on the Nokia X7. The results were almost identical to the original Galaxy S readings, with a difference of just a few nits. This is probably due to slight software differences in adjusting screen brightness and on top of a reasonable margin of error. If you put down the sciency measuring tools though, the two screens are virtually indistinguishable in all aspects.

Above the display is the obligatory earpiece and a front-facing VGA camera. There're proximity and ambient light sensors here too.

Below the screen are three Android keys - the hardware Home key, flanked by the touch-sensitive Menu and Back keys, which are backlit in white.

Earpiece, secondary camera and sensors above the display • Home, menu and back keys below it

The layout of controls is the same as in the original too. The Power/Lock button is on the right-hand side. It's small but protrudes, so it's easier to press, and its position makes it comfortable to reach in both right and left hand use. Accidental presses are unlikely.

The volume rocker, which is easy to reach though a bit stiff, is on the left and just above it is the lanyard eyelet.

Power/lock key on the right • Volume rocker on the left

The top features the 3.5 mm headset jack (left uncovered) and the microUSB port, which is protected by a sliding cover. The bottom only features the mouthpiece.

microUSB port and 3.5mm audio jack on top • Lonely mouthpiece at the bottom

At the back you’ll find the 5 MP camera lens and the loudspeaker grill. There’s no camera flash, nor any camera lens protection just like on the original. The characteristic hump at the bottom of the back keeps most of the phones back (including the camera) slightly away from the surface that the phone is lying on.

You shouldn’t rely too much on this to prevent scratches and it certainly doesn’t prevent fingerprint smudges on the camera lens.

There's a small bump next to the loudspeaker, which somewhat prevents it from being muffled when the phone is placed on a level surface.

The back panel and 1650 mAh Li-Ion battery

The battery is a 1650 mAh Li-Ion unit – that’s 10% higher capacity than in the original Galaxy S. A higher-clocked CPU uses more power and a bigger battery makes sense. Official numbers put the talk time at nearly 13 hours (in 2G, half that in 3G) and and also promise almost a month of standby. Those numbers are quite like those quoted for the original Galaxy S and are as far away from the truth as they were with the Galaxy S.

In our browser battery test, the Samsung I9001 Galaxy S Plus lasted 4:30 hours. That puts it around the middle of the Android pack, on par with the LG Optimus Black (another single-core droid). Surprisingly (or not), the Galaxy S Plus outlasted the original Galaxy S by nearly half an hour. 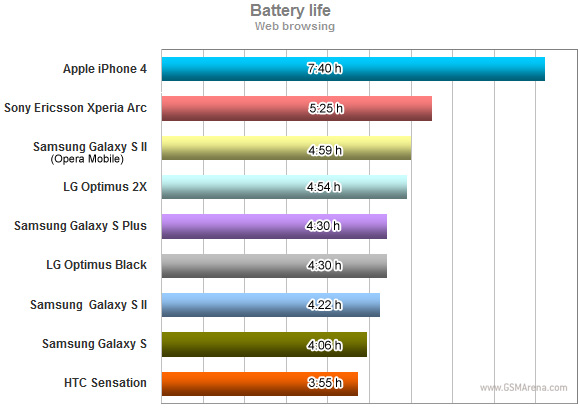 The design may be a bit old, but it allows comfortable handling and the styling is clean and uncluttered. The all-plastic build is nothing to be excited about though on the upside, fingerprints are less of an issue in the new edition.

The Galaxy S Plus held in hand

The Samsung Galaxy S Plus is a fairly compact device for a 4-incher. However, if you look at other recent devices, the Galaxy S II shows that a 4.3" screen is possible at roughly the same dimensions too.