The Samsung Galaxy Sport is the latest smartwatch from Samsung and the device was just certified with the Taiwanese NCC. For the record, the same device has already been cleared by the FCC in the US and the NRRA in South Korea.

SM-R500 is the model number of this device, which is widely considered to be the Samsung Galaxy Sport, not to be confused with the Gear Sport. The device was codenamed “Pulse” and is rumored to be the first Samsung wearable to support Bixby Reminders before ultimately upgrading the Galaxy Watch with Bixby support. 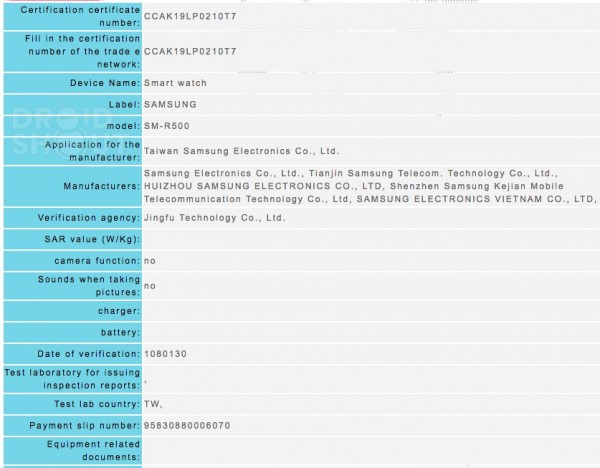 The Galaxy Sport is expected to have 4GB of on-board storage, Wi-Fi b/g/n connectivity, Bluetooth, GPS, GLONASS, and NFC for mobile payments. According to the report, Samsung is preparing two other model numbers SM-R370 and SM-R375, which are believed to be variants of a successor to the Gear Fit activity trackers.

Samsung might have a lot to announce at the Unpacked event if it’s going to announce three Galaxy S10 variants, a foldable Galaxy phone, possibly a Samsung Galaxy Sport and perhaps even a successor to the Gear Fit. This will be a major event for Samsung and we’ll be in attendance as well, so stay tuned.

Good overpriced price for used ones or refurbrished.