IFA hasn’t even started yet (starts tomorrow) and the gadgets are already flying - Samsung just dropped the mother lode, including the first SuperAMOLED Plus tablet and the phone/tablet hybrid that is the Galaxy Note.

The Tab 7.7 is powered by an overclocked version of the Exynos chipset found in the Galaxy S II - a 1.4GHz dual-core CPU, 1GB RAM and Mali-400MP GPU. This chipset has been blazing through our benchmarks - we can't wait to see how it performs against its bigger Tab 10.1 and Tab 8.9 siblings. 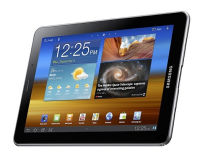 We're working on a hands-on for the Samsung Galaxy Tab 7.7 but for now here are some more mouth-watering specs - it's only 7.8mm thick making it the thinnest tablet yet and has very little bezel around the screen (since the capacitive keys have been removed).

The list goes on: a 3MP autofocus camera with LED flash and 720p video recording, a 2MP fixed-focus front camera, 16GB storage and an IrDa port (yes, you read that right). You also get telephony and 3G HSPA+ connectivity.

The Samsung Galaxy Tab 7.7 runs Android 3.2 Honeycomb with the tablet version of the TouchWiz UI. It will come in a variety of versions when it comes to internal storage - 16/32/64GB and you have a microSD card slot too.

Stand by for our hands-on with the Samsung Galaxy Tab 7.7 for more details.

Here are some live shots of the Samsung Galaxy Tab 7.7, fresh from the camera:

The Samsung Galaxy Note also debuts at IFA but it can't make up its mind - is it a tablet or a phone? Both - it has a 5.3" screen but also full telephony features. And we've seen people use a 5" Dell Streak as a phone, so it's really up to you if you use the Note as a phone or as a tablet. 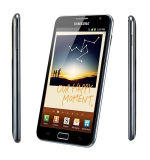 There will be a selection of accessories for the Samsung Galaxy Note - a pen holder for the S Pen stylus, a dock and even a car holder.

When will the ICS update be available?

waiting for 7.7 is very difficulty! Anybody know when is 7.7 going to release?