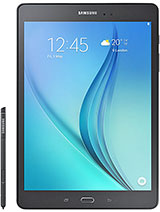 Windows is the best OS , its million times better than android . Windows phone doesnt lag or hang as software is optimised and due to which the battery life is also way better than android . And even windows has thousands of apps and games which are very useful . Android has such poor ram management and due to which after few months the phone memory gets full which is never happens with Windows .

I got my Tab A 8.0 with S pen last weekend. I was blown away with great enhancement that they did for this tablet especially with the s pen functionality. I also got a Note 8 and loved it.
Better brightness, battery life, thinner, lighter, bigger screen thanks to slimmer bezzle

in the philippines we have here with sim card i dont know how nice it is. i dont know if the battery stay longger than note 8.0

Just bought the 9.7 model and has been using it for a week now. I bought it because i need a bigger tablet (i was using tab 7.7) and has S pen function. At first i was a bit disappoint with the pixel density as i was used to the tab7.7 AMOLED screen but after using it is actually just nice for its intended role as document viewer. The bundled microsoft apps (word, excel etc) is also nice but seems to take some time to get it started but there are a lot of other similar app in the google store. The S pen is superb; i guess it justify the price. I don't know why the spec here stated no sim but mine has micro sim slot. My advise if you don't need the S pen look for other model

1- Microsoft office is not compatible with this tablet
2- reading for 3 minute and your eye will get hurt and you will feel it
3- No i'be under stood the British proverb I'm not rich to buy cheap things
4- I threw it into trash , I can't hurt someone else's eye just for being boor
5- I hope some one from USA to seriously file a case into the court against Samsung just for this tablet, because it is not safe for eyes to read from it, and because it is over priced targeting poor people, over priced product must target only the rich not the poor, this table is a deception

With low ~132 ppi pixel density, this tablet is over priced by 200 dollars, and it is not a budgetary tablet as poor people, who suffer to earn dollars for their kids, may think

it has available in indonesia

Let's give a name for low end tablets with low ppi
Let's call such tablets: PPI or PPI TABLET ;)

Lovely s, 23 Jul 2015Why without simSame as iPad - doesn't has a simcard slot

We have this in KSA since a couple of month. We didn't get the regular one. Both sizes.

I have seen this at Lazada Philippines since June, if I'm not mistaken. How come it is on "coming soon"?

Related devices
The devices our readers are most likely to research together with Samsung Galaxy Tab A 9.7 & S Pen