The Samsung Galaxy Tab Pro 10.1 uses Samsung's new style of hardware controls. They are still arranged capacitive/hardware/capacitive but the left button now handles the app switcher rather than menu.

The majority of apps out there (soon to be all, Gingerbread slipped to 20%) have an options menu as part of their on-screen interface, making a hardware menu key redundant. Anyway, a long press on the Home key now launches Google Now, while a double tap triggers Samsung's S Voice.

The remaining set of hardware controls on the Tab Pro 10.1 is found at the top - the power key and the volume rocker. The IR blaster is also here, which is becoming standard equipment on Samsung's higher-end tablets.

Power key and volume rocker on top • the IR blaster

The right side of the tablet is where you'll find the card slots - one in the Wi-Fi only version of the tablet (the microSD card slot) and two in the LTE model (an additional microSIM card slot).

The loudspeaker grilles are one on each (short) side and are positioned near the top, so that your hand won't block them. Holding the tablet high enough to block them is possible, but uncomfortable. The 3.5mm audio jack is next to the left speaker grille.

Loudspeaker grills on the side • 3.5mm audio jack on the left

The microUSB port is at the bottom - a traditional USB 2.0 port. Considering we rarely plug in our devices to a computer (with the proliferation of cloud sync solutions), having USB 2.0 instead of 3.0 is not a major concern.

microUSB 2.0 port and the mic pinhole

The mic pinhole is near the USB port. Keep in mind that the LTE version of the Galaxy Tab Pro 10.1 supports voice calls. Leaving the tablet lying on its back keeps both the loudspeakers and the mic clear, but we'd still consider using a headset for talking (Bluetooth or even wired).

Video calls are also enabled - both standard 3G video calls and over the various Internet-based chat apps (including Google's Hangouts and Samsung's ChatON).

Around back is the 8MP camera with its LED flash. The camera can shoot 1080p video and, if you get the LTE version, it will do it at 60fps (the Exynos-powered Wi-Fi only model tops out at 1080p @ 30fps). The camera lens is centered horizontally so you're unlikely to ever block it with your fingers (we've had that happen with other tablets, including the iPad).

The faux leather back houses the 8MP/1080p camera

Despite getting lighter, the Samsung Galaxy Tab Pro 10.1 has the same 8,220mAh Li-Po battery as the Note 10.1 (2014). With the same screen and chipsets, we expected the tablets to have similar battery life (possibly affected by the newer Android OS version), but we ran the tests anyway. And since our review unit is the LTE model (with voice call functionality), we ran a call test too.

The call test result is spectacular (no surprise here), while the web playback and web browser times are quite competitive too. 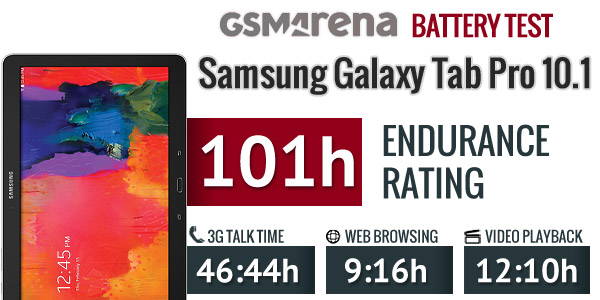