The Album view in the Galaxy Tab 10.1 gallery app shows a stack of photos with a navigational bar on the left with all the albums. You can use the pinch gesture to change the size of the thumbnails. Various sorting and viewing options are also available.

The gallery supports bulk actions, photo notes, there are lots of sharing options as well, plus there is a powerful embedded image editor you can launch when viewing a single image.

Another cool feature is Buddy photo share - it recognizes faces in a photo, you link those to your contacts and the tablet will learn to recognize them itself in the future and tag them automatically. Then the faces in the photo become handy shortcuts to that contact. This way you can quickly send that photo you took of your friend just by touching their face.

For managing other files, the Tab Pro 10.1 comes with a file browser. Besides the basics, the app also integrates with Dropbox, can handle ZIP files and even connect to FTP servers.

The Samsung Galaxy Tab Pro 10.1 comes with the redesigned TouchWiz music player. It offers the same rich functionality, but with a much better interface. The new Music app relies on a customizable tabbed interface, instead of the previous split-screen UI. Both playlists and folder view are supported.

The Now playing screen, even though it's got a new skin, gives you the usual options. The music player will also try to find the lyrics for the song you're listening to.

Automatic playlists can be generated with the Music Square feature, which categorizes songs by tempo (calm-exciting) and mood (passionate-joyful). The mood axis can be changed to years instead, if you want a playlist of classics or new hits.

The music player supports a variety of codecs (including FLAC) and Samsung has implemented several audio-enhancement features. The equalizer presets (called SoundAlive) are cleverly organized into a square similar to the Music Square. The presets balance between Treble and Bass, Vocals and Instrumental. You can also just tap the Auto toggle or enable a Tube amp effect.

The advanced view of the equalizer gives you a proper seven band equalizer you can tune manually and enable additional effects like 3D, Bass and Clarity.

Audio features don't end here. Smart sound will keep the sound level between tracks, while Adapt sound tests the performance of your headphones and tunes the equalizer based on that.

No DivX and AC3 codecs for the video player

The video player found on the Samsung Galaxy Tab Pro 10.1 features a UI similar to the music player, unfortunately, the video codec support is quite patchy.

Many videos we tried resulted in an "audio codec not supported" message and even some basic video codecs don't work (i.e. DivX). MKV, AVI (XviD) and MP4 videos do play, but anything beyond MP3 or AAC sound is no-go.

The video player has three tabs - Personal, Downloads and Nearby devices - complete with a search field. The available videos show up as a grid of animated thumbnails, but list and folder view are also available. A nice option lets you pull out a list of videos on the left, somewhat similar to the gallery app (but no folders are visible here).

You can change the zoom mode (100% or fit to screen with and without affecting the video's aspect ratio) and there's a pinch zoom too, in case you want to get close up on a specific part of the action.

The video player supports Multi Window but there's also Pop Up Play, which puts the video in a floating window, which is visible throughout the user interface. It can be moved and resized.

If subtitles are available, the video player will automatically find and load them. You can also manually load subtitles, if the video and subtitle file names don't match.

Unsurprisingly given the record of recent Samsung tablets, the Galaxy Tab Pro 10.1 delivered a great performance in our audio output test. With clean output in both parts of the test and decent if unspectacular volume levels the slate will leave few audiophiles wanting for more.

Not even plugging in our pair of headphones managed to bring the output down - it mostly had effect on the stereo crosstalk and even there the increase wasn't too dramatic. 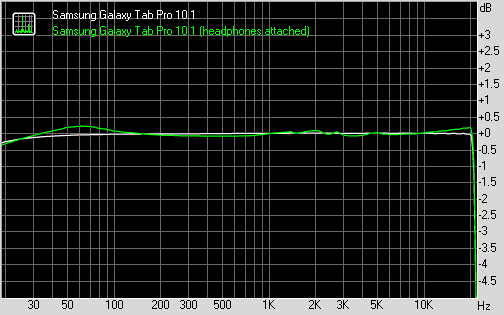