The gallery on the Galaxy Tab Pro 8.4 offers various sorting and viewing options. Pinch zooming in or out will increase or reduce the size of the thumbnails.

The Album view shows a stack of photos with a navigational bar on the left with all the albums.

The gallery supports bulk actions, photo notes, there are lots of sharing options as well, plus there is a powerful embedded image editor you can launch when viewing a single image.

Another cool feature is Buddy photo share - it recognizes faces in a photo, you link those to your contacts and the tablet will learn to recognize them itself in the future and tag them automatically. Then the faces in the photo become handy shortcuts to that contact. This way you can quickly send that photo you took of your friend just by touching their face.

Samsung Galaxy Tab Pro 8.4 brings a completely redesigned TouchWiz music player. It offers the same rich functionality as the previous version, but introduces a much better interface. Naturally, the player supports a variety of file formats, including the FLAC format.

The new Music app relies on a customizable tabbed interface, instead of the previous split-screen UI. Playlists are supported as well. The bottom of the screen, just like before, has the music controls.

The Now playing screen, even though it's got a new skin, gives you the usual options - a timeline scrubber for the track, playback controls, and an AllShare shortcut. A coverflow-like list of album art lets you know what the next song will be and is an easy way to skip to it. The music player will also try to find the lyrics for the song you're listening to.

The advanced view of the equalizer gives you a proper seven band equalizer you can tune manually and enable additional effects like 3D, Bass and Clarity.

Audio features don't end here. Smart sound will keep the sound level between tracks, while Adapt sound tests the performance of your headphones and tunes the equalizer based on that.

No DivX and AC3 codecs for the video player

The chapter preview detects chapters in the video and shows a rectangular grid, with live thumbnails (just like the grid view above). Hovering your finger over the timeline scrubber lets you preview part of the video in a small thumbnail - just like YouTube videos do when you hover the mouse of your computer.

The Samsung Galaxy Tab Pro 8.4 did excellently in our audio quality test. When docked to an active external amplifier, it produced stellar audio, scoring greatly in every part of the test. Its volume levels were just above average, but that's enough for an excellent overall mark.

The only degradation when you plug in a pair of headphones is a slight spike in stereo crosstalk. It's nothing to worry about though and it's way better than most competitors have it. A gifted performance by the Galaxy Tab Pro 8.4 on this occasion. 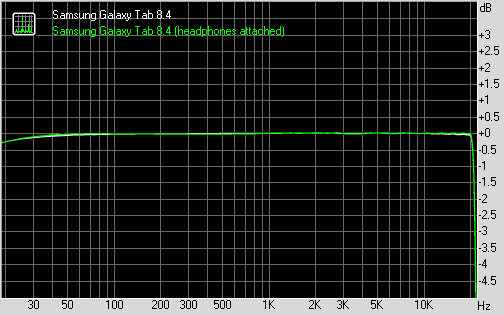 While our Galaxy Tab Pro 8.4 doesn't have telephony features, we still tested the loudspeaker performance as it will be used for music and videos. It scored a Very Good score and we can confirm the stereo speakers are indeed quite loud.