The gallery on the Galaxy Tab S 10.5 offers various sorting and viewing options. Pinch zooming in or out will increase or reduce the size of the thumbnails. The album view shows a stack of photos with a navigational bar on the left with all the albums.

The app supports bulk actions and photo notes. There are lots of sharing options as well, as well as a powerful embedded image editor. It supports highly customizable slideshows, too.

The music player relies on a customizable tabbed interface rather than the previous split-screen UI. Playlists are supported as well. The bottom of the screen has the basic music controls.

The Now playing screen gives you the usual options - a timeline scrubber for the track, playback controls, and an AllShare shortcut. A coverflow-like list of album art lets you know what the next song will be and is an easy way to skip to it. The music player will also try to find the lyrics for the song you're listening to.

The Samsung Galaxy Tab S 10.5 performance in our audio quality test was identical to that of its little brother - the Galaxy Tab S 8.4. When docked to an active external amplifier, it produced stellar audio, scoring greatly in every part of the test. Its volume levels were above average too, rounding up an excellent overall performance.

The stereo crosstalk degradation when you plug in a pair of headphones is rather big, but the good news is none of the other readings are affected. It's not a perfect performance here, but one that should please the vast majority of users. 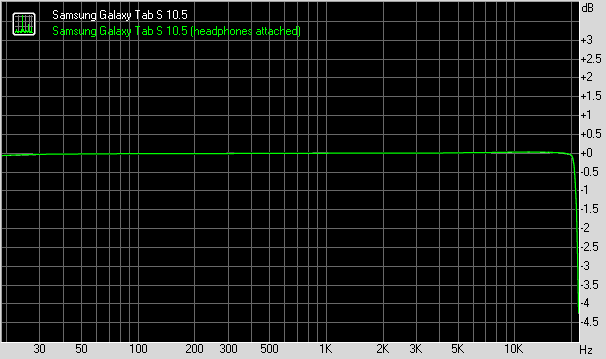 
You can find more on the testing procedure here.