Samsung Galaxy Tab S has the best tablet display ever

The recently announced Galaxy Tab S line comes with the most impressive displays ever seen in any tablets, according to the latest screen shoot-out performed by DisplayMate.

The experts over there have praised the AMOLED touchscreens featured in both the Galaxy Tab S 8.4 and the Galaxy Tab S 10.5, saying they're almost on par with the panel used in the Samsung Galaxy S5. And that received the prize for the best smartphone display ever tested by DisplayMate. 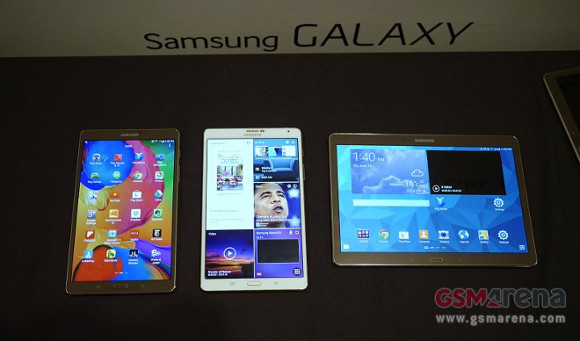 So it looks like Samsung's bet on Super AMOLED technology for the Tab S duo paid off. These are the first tablets to come with AMOLED screens since the Galaxy Tab 7.7 from 2011 - though they seem to have been well worth the wait.

In the tests, the Galaxy Tab S line established new records for tablet screen performance, coming with the highest color accuracy, lowest screen reflectance, and smallest brightness variation with viewing angle ever seen on a tablet. These accomplishments come alongside the well known infinite contrast ratio of AMOLEDs. And when it comes to color accuracy, these weren't just the best tablet displays, but the best of any tablet or smartphone - even leapfrogging the Galaxy S5's panel.

The maximum brightness for the tablets has been found to be good, but not record-breaking. The Nokia Lumia 2520 bests Samsung's newest efforts with 684 nits compared to 546 nits. This seems to be the only area in which the Tab S panels haven't been rated as Excellent.

My 10.5 amoled tablet has lost its sharpness. When I bought it 2 yrs ago it was awesome, my photos were so sharp you could cut yourself on them.Now the same photos and newer ones have lost that sharpness.I dont know why but I'm very dissappointed.

Its a pity that these tablets dont come with an S-Pen. Does that mean that Samsung are going to release a 2015 version of the Note tablets later this year? FFS.. http://goo.gl/6wI0og

lol.. Nice answer to trolls. u make my day