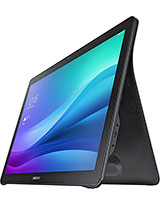 AnonD-78052, 30 Oct 2015if you don't like it help Samsung keeping it inside its warehouse for ever, companies must pro... moreI think you replying to the wrong person. I'm talking about LTE and video call. What R&D are talking about?

Anonymouses, 30 Oct 2015For office usages. You have to admit, office wifi is not that fast at all compare to LTE. Mayb... moreif you don't like it help Samsung keeping it inside its warehouse for ever, companies must provide customers with what customer wants not with what R&D says

It could have mini HDMI or "something like that" port, so it could be doubled as monitor also.
Just saying...

Anonymous, 28 Oct 2015Why does this have 4g? Who is going to carry an 18.4 inch tablet aroundFor office usages. You have to admit, office wifi is not that fast at all compare to LTE. Maybe video call is available but I don't see any Call function in this tablet. I do see Contacts. Weird. Need a full review soon.

mir, 27 Oct 2015They have the nerve to name their 120ppi tablet "View."To give you an overview, there is no tablet or monitor that size have more than 200ppi ever existed even if it is 2k display. For example, Dell XPS 10 with 10inches display only have 155ppi. Samsung Galaxy Note Pro 12.2 only have 247ppi even when using 2k display.

If Note Pro was 18.4inches the ppi would be only 164ppi anyway. So, if Galaxy view even use 2k display with 164ppi, there is not much difference compare to when it is using the 1080p display with 120ppi.

All you get with 2k display is more battery drain and more complain from customers. Even with a 4k display, at 18.4inches you get merely 240ppi. If Samsung do use that 4k display, the price will go approximately over $1500 for the giant tablet and no one will buy it. Now you understand?

For everyone talking about the screen density etc... It's primarily designed and meant for Kitchen use. So leaving a fairly huge 18.4 table on a stand in the kitchen means you can stand for a fair distance away from the tablet whilst doing other things, and still see the tablet with high quality (since 1080 at a distance is incredibly clear). Most the other specs are designed around 'mothers' or really anyone that cooks a lot. You don't need a good camera at all, but it's there just in case, etc...

I wonder if this is still categorized as a phone, does it have an earpiece? If yes, then I would love to see people carrying this to use for a regular call like an ordinary cellphone.

If you guys paying for the design and the kickstand alone please go for lenovo yoga tab 2 10.1 better screen better specs. Lol💪👍💻.

No stylus makes it a worthless device. I mean whats the point of the huge size if theres no stylus to draw on it

Why does this have 4g? Who is going to carry an 18.4 inch tablet around

total idiocy, though I've been a fan of SGS 6 but this tablet with the massive screen and that low resolution, stupid camera, mid-range SoC takes a handful of morons to buy one!

So worse specs than the 1.5y old NotePro and TabPro 12.2.... Don't waste your money on this. I'll stick with my NotePro.

Highlander1978, 27 Oct 2015The battery is not just mAh, its a combination of two other features that are most important. ... morewell, you are almost right, but at same time almost wrong.
Voltage has nothing to do with duration of battery. MAH does.
Simple as that, if they put it 11v battery thats because it wil draw all that power. Its not possible to them put 11v battery when just 5v needed.
So MAH its everything to battery time. Since voltage can vary as needed.

Why its called "Galaxy View" when display is just an average TFT unit?

Nobody knows,
Perhaps this tablet is all you need,
Why not,
Great job, Samsung