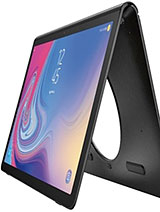 no oled, no buy

Not cool at all

How about the screen !
Is it rotating or the same as the first one?

lolno, 01 May 2019What is this, I don't even XD Over 2kg for a tablet? Are they going for new heavyweight cha... moreMost of your points make sense but this is practically a TV with a battery, not a laptop/tablet, just extremely overpriced. However, there's nothing wrong with the weight actually, the average laptop has only 1/3 the capacity of this thing's internal powerbank, and the weak ARM-based SoC and RAM potentially helps in battery life even further

Coral, 02 May 2019No. Look at the A50 review here on gsmarena. At best, the Exynos 9610 is just as fast as the ... moreSD 660 and Exynos 9610 give about the same performance.
Its left to nm's and battery consumption sadly. Exynos 9610's CPU is great but no one knows why samsung decided to use a weak GPU and thats disappointing

What is this, I don't even XD

Over 2kg for a tablet? Are they going for new heavyweight champion? XD
Seriously, I've seen laptops that weigh less, and they still have the benefit of an added keyboard, and you can do much more with them than only watching media.

As it is, this device screams "failure" all over. It's far too weak to be used for anything but media consumption, it's far too heavy to have it with you all the time, it doesn't even come with a keyboard to make up for the extreme weight, it only comes with outdated Android 8, and considering you can only use it for media watching, it's brutally overpriced. No thank you.

To Samsunk, this device was made for media, not for tasks that need much power. Its for entertainment.

A mobile TV that can run apps and supports a SIM card. Could've been cheaper tbh, so get this thing with a discount/price cut, folks

In a related topic, it seems that this is meant to be like the Tab S5e. Except that one has a smaller OLED screen, is more mobile and can handle games better... but no 3.5mm jack...