At the beginning of the week, we saw more certification details on the upcoming Samsung Galaxy XCover Pro and now the rugged phone managed to obtain yet another seal of approval, this time from the FCC. The new certification reveals a device with the SM-G715FN model number which falls in line with previous specification and benchmark listings. 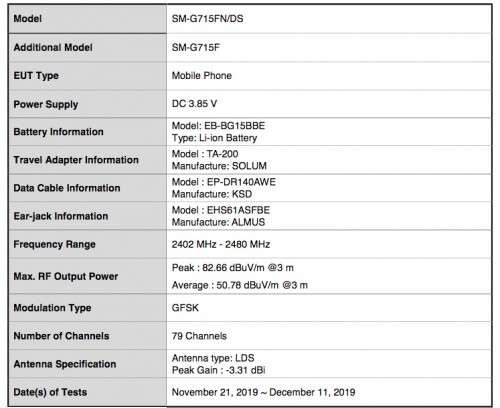 The new listing confirms the XCover Pro will feature dual-band Wi-Fi, Bluetooth 5.0 and NFC. We also get more details on the dimensions - the phone will be 160 mm in height and 77 mm wide. The display diagonal is also 160mm which translated to 6.3-inches. The phone will also support 15W charging.

Previously we saw the new XCover Pro will come with the Exynos 9611 chipset along with 4GB of RAM. On the software side, It will run Android 10, presumably with One UI 2.0 on top. Given the rugged nature of the XCover series, we’ll certainly see MIL-STD-810G and IP68 certifications. According to speculation, the device is expected to launch soon in the European markets.

I hope the Pro does not stand for a heavy device with a large screen, max. 5 inch please !

what's wrong with current S8 active? are you that type of a guy who always want the best and the latest? us (rest of the world) who can't purchase a new, sim-free S8 active with box fully sealed will be happy if samsung will release the S8 active int...

Hey SAMMNY, where is the next generation Samsung S8 Active Series? Are u kidding me!!