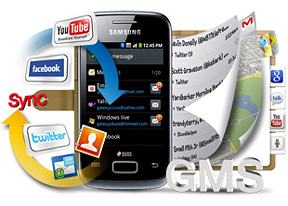 The modest retail package of the Samsung Galaxy Y Duos is hardly a surprise considering the low price. You do get a standard microUSB cable and charger, along with a 2GB microSD card complete with an SD adapter.

What the package omits is a set of headphones - you'll have to get them elsewhere if you want to enjoy the music player or the FM Radio on the phone. This may be a region-specific thing though, judging by user feedback to our original Galaxy Y review.

The retail box of the Galaxy Y Duos

The Galaxy Y Duos is a compact phone, although neither impressively slim, nor exquisitely crafted. At 109.8 x 60 x 12 mm, it's just larger enough than the Galaxy Y, to accommodate the slightly bigger screen and the extra SIM slot.

The styling is the usual Samsung, there are minor differences to the single-SIM Galaxy Y. The most notable is an elongated Home button, as opposed to the square Home key of the original. The chrome-like front frame is more prominent but it doesn't fit so well with the rest of the phone's design - particularly the rubbery rear. On a positive note, the build is quite good.

The 3.14" TFT display of QVGA (240 x 320) resolution is at the bottom of the food chain in terms of specs, and, we're afraid, the real-life image quality reflects that too.

The Galaxy Y Duos up front

Images are highly pixelated, while the low contrast and inadequate brightness make it uncomfortable to use on a bright sunny day. Here's the full rundown below.


Below the screen is the usual arrangement of a physical Home button and two capacitive Menu and Back keys. They light up only when touched and otherwise stay out of the way. Above the display there's an earpiece and a proximity sensor to disable the touchscreen during calls. What the phone lacks is a front-facing video-call camera.

Controls and sensor around the display

Near the top, on the right side of the Galaxy Y Duos, which is the usual place in Samsung phones, is the power/lock button.

On the right side of the device

The left side features a lanyard eyelet and a single-piece volume rocker with good feedback.

At the bottom of the Galaxy Y Duos you'll find the microUSB port for charging and data transfers and the microphone pinhole.

Bottom of the phone

The battery cover is plastic (as is the case with most Samsung phones these days) but looks durable and feels nice to the touch. The rubbery finish ensures good grip.

The 3.15 MP camera lens is centrally placed at the top and there's a loudspeaker grille on its right. A Samsung logo is stamped underneath the camera lens and grille.

The rubbery back has good grip

Removing the back panel is easy enough and reveals the 1300mAh Li-Ion battery, which is quoted at 360h of stand-by and up to 9h of calls in 3G. The Galaxy Y seems to easily go through a day and a half of heavy testing with the two SIM cards always on stand-by. We'll be back with a detailed battery test over the next few days so keep watching this space.

Update, May 3: We're done with the battery tests and the results are quite good. Our final endurance rating is a little over two days. Note that we used two hours of 3G talk time per day along with an hour of browsing to arrive at that number (usually we assume an hour each of 3G talking, web browsing and video watching a day). If we plug in the 2G talk time result into the equation, the endurance gets close to three days. 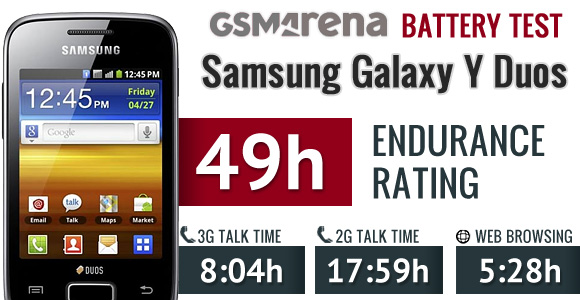 The Samsung Galaxy Y Duos S6102 proved to be a capable runner in our battery race. Considering people looking at a dual-SIM phone will likely use it mainly for talking, the Y Duos will easily last for a couple of days on a charge. We didn't test the video playback battery life as our test videos wouldn't run (the Y Duos supports only low-res videos and it wouldn't be fair) and it's not a phone likely to be used for movie watching.

You can read more about the battery life on the Galaxy Y Duos over at our blog.

While not extravagant or necessarily pretty, the Samsung Galaxy Y Duos is a compact and straight-forward device. It costs little and looks durable enough to survive the occasional knock and drop.

It's easily pocketable and makes single-handed operation trouble free. Considering you get two phones in such a friendly shape and size, there's little to complain of.