We first heard of the Samsung Galaxy Y Pro Duos yesterday and it only took us a day to get the official confirmation of its existence. The Android smartphone rocking appeared in a couple of live shots, showcasing its key feature - the couple of SIM slots at the back.

One of our readers happened to have a prototype unit of the Samsung Galaxy Y Pro Duos with him and was kind enough to send us some live shots of the smartphone. They aren't of particularly great quality, but are enough to convince us that what we saw yesterday was the real thing. 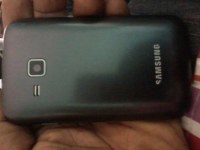 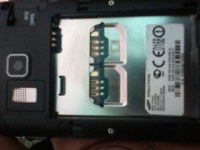 You can clearly see the two SIM card slots at the back and there's also a microSD card slot alongside them. According to our tipster, the SIM cards are alternated through the Android notification area.

Unfortunately, that's all the specs of the Samsung Galaxy Y Pro Duos that we can give you at this point, but we hope to see an official announcement soon enough to get the answers to all our questions about the device.

A big "Thank you" to Ransford Nartey for sending this in!

The price of this phone is 11,000. This is expected to be released by end of march.