The support page for the Samsung Galaxy Z Flip 5G rumored to arrive on August 5 has gone live on the company's official South Korean site. It's listed on the website with model code SM-F707N, which from a previous report we know is the South Korean version of the clamshell foldable smartphone.

The support page doesn't include any specs of the Galaxy Z Flip 5G, but the smartphone has been certified by TENAA, which clears its way for launch in China.

The Galaxy Z Flip 5G will have a total of six model numbers and the one that's bagged TENAA certification sports model code SM-F7070.

The listing on Chinese certifying authority's website reveals the Galaxy Z Flip 5G will sport a 1.05" secondary screen and pack two batteries - 2500mAh and 704mAh - as opposed to the 3,300 mAh cell the 4G variant shipped with. 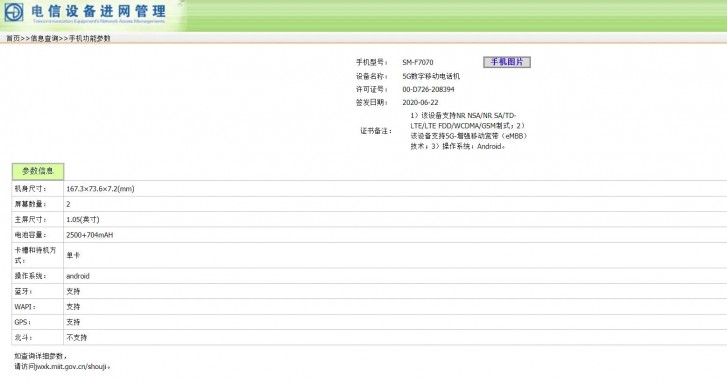 A separate listing on TENAA with full specs of the Galaxy Z Flip 5G isn't viewable yet but popular Chinese tipster Digital Chat Station has shared the specs, which include a Snapdragon 865+ SoC and 6.7" primary AMOLED display of 2636x1080-pixel resolution.

The secondary screen on the Galaxy Z Flip 5G will be smaller than the 4G variant's, but it will have the same resolution - 300x112 pixels. Besides, the selfie camera is upgraded from 10MP to 12MP and the dual camera setup now includes one 12MP and one 10MP unit.

The weight, dimensions, and charging speed of the Galaxy Z Flip 5G remain the same as its 4G counterpart.

A certain type of people will always hate technology that's years ahead of what their own favourite brand can produce. There is a fruity company that excels in having an army of negative people on the internet to talk trash about better technology. T...

In comparison to what exactly? Do you just wait for these articles so you have an excuse to be miserable? lol