As February nears and Samsungs Unpacked event is just three weeks away the leaks surrounding the Galaxy Z Flip are giving us a clearer picture of what to expect from Samsung's second foldable phone. A new Twitter post from Max Weinbach who previously revealed details about the S20 lineup is giving us a much better picture of the Z Flip's hardware package. 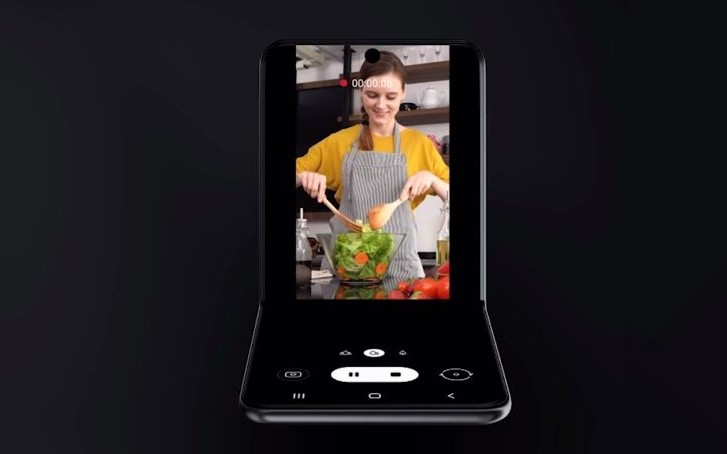 Starting with the display, we are getting a Dynamic AMOLED panel covered with Ultra Thing Glass (UTG) and it will apparently feature a crease at the folding point. This is to be expected with foldable devices but the UTG solution should be far more durable than the Galaxy Fold's plastic.

The phone will also come with a side-mounted capacitive fingerprint scanner. Weinbach also shares the device will run on the Snapdragon 855+ chipset instead of the previously rumored Snapdragon 855.

It will use "Samsung Ultra Thin Glass" which has crease. It will use a Dynamic AMOLED display.

Another key detail is the outward notification screen which should be a 1-inch panel. This screen will show charging speeds, battery info, time, date and will also serve as a camera viewfinder.

The front display is 0.1". You can use it to check charging speeds and battery info. It will also work as a viewfinder for the camera so you can use the better rear camera for selfies.

The Z Flip will come with two 12MP shooters on the back which are revealed to be regular (wide) and ultrawide modules. Wired charging speeds are confirmed at 15W, theres also wireless and reverse wireless capabilities but we dont get info on their charging speeds.

If they went with a 710, people will complain that it's midrange. 855 would've been called too old for a 2020 flagship. 855+ is the best compromise since they were already in development when the 865 came out

Why 855+, its not even battery efficient, 855 is more than satisfactory for this phone with 3300mah, infact 710 would have been much better, both proven on k20 pro, No wonder xiaomi is doing much better. How can such a Giant Company can lack such a s...

Now you've got me curious, what make of jeans do you wear? I actually like the Mate 20 X alot, it made it onto my shortlist because of it's great sound quality, much better than Mate 20 & the Mate 20 Pro (Pro has no 3.5mm jack which I use on...