Samsung has always kept back from using standardized hardware that comes as a requirement for Android Wear OS. Even with the newly found similarities, the Korean giant still remains quite different from the smartwatch crowd in terms of hardware and software.

Samsung has opted for a very nice display on the Gear S2. The round panel is of the Super AMOLED variety, which definitely provides richer colors than the widely-employed P-OLED displays of the competition. At 1.2 inches, the screen is slightly smaller than say what LG, Motorola or Huawei has to offer. However, with a resolution of 360 x 360 pixels, the Gear S2 is second only to the Huawei Watch and the new LG Watch Urbane 2nd Edition when it comes to picture detail. With the lower screen, pixel density works out to 302 ppi, quite impressive for a watch. 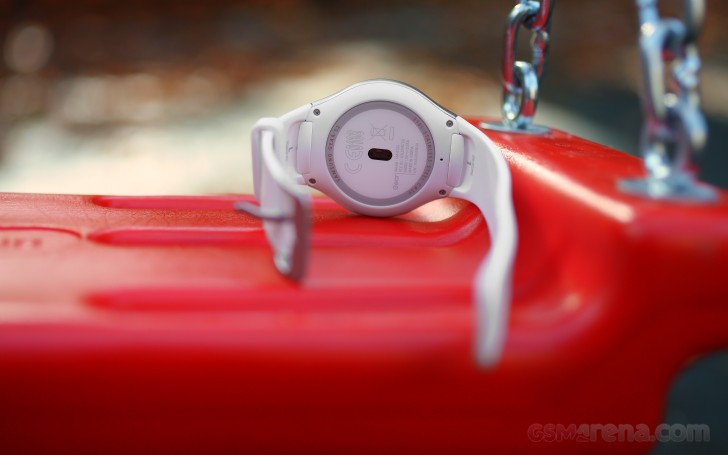 Contrast is expectedly outstanding, it's also quite bright. Side angles are also superb and reflectivity is kept at a minimum. The Gear S2 is just as pleasant to use indoors as it is outside in the sun.

Rather disappointingly though, there is no Gorilla Glass or sapphire covering the display. Third-party solutions are available so, if you fear getting your watch scratched, it might be a good idea to pick up a protector.

The rest of the internals include a Samsung Exynos 3250 or a Qualcomm MSM8x26 chip, the latter found in the 3G model. Both are dual-core, clocked at 1.0GHz, although we can't imagine anybody would really be concerned about the frequency. The chipset is coupled with 512MB of RAM, like most competitors plus 4GB of onboard storage.

Besides network connectivity, the Gear S2 3G also gets another unexpected benefit from its different chipset - GPS. Ii is a neat thing to have too and could potentially allow you to locate your watch remotely, just like the other way around, which works across the range. But more on that later.

As for connectivity, the Gear S2 has all the basis covered - Bluetooth is naturally there, as a main means of synching, seeing how the phone is close-by most of the time ant the Low Energy profile is quite power efficient. There is also Wi-Fi, which has you covered outside Bluetooth range. Last, but not least, the 3G version can stay connected practically all the time, if in cell range. Oh and there is the aforementioned GPS in that one too.

The Gear S2 actually has another trick up its sleeve - built-in NFC. Its sole purpose, as least for the time being, seems to be Samsung Pay and it isn't enabled quite yet. Still, the idea is clear, if you have a compatible Samsung handset and use Samsung Pay, your watch can be used to pay at a NFC terminal, much like the Apple Watch does it. That last bit is actually pretty important. The Gear S2 can only be used with NFC terminals. LoopPay - the technology that allows a select few Samsung phones to mimic a magnetic card swipe isn't onboard the watch. Also, hopefully the NFC gets put to good use in other scenarios in the future, like unlocking your front door, for instance.

Last, but not least, the Gear S2 draws its power off a 250 mAh to 300 mAh battery pack, the latter being used inside the naturally more power-hungry 3G model. It is probably the reason for the extra girth and weight on that one.

For its essentially streamlined and quite clean design, the Gear S2 does have quite a few controls at its disposal. Apple can brag about its digital crown, but the Gear S2 is just as innovative with its rotating wheel - yet another modern twist to a traditional watch element.


Using the wheel is nothing short of superb user experience. It is smooth, responsive and has a clear physical feedback, enhanced even further by a soft vibration once the end position of a scrolling interface has been reached. Using it is so much fun that we often found ourselves just playing with it aimlessly, while doing something else. It's as absorbing as busting bubbles on a bubble wrap sheet, only shinier! Hopefully this won't wear down the wheel too quickly - it does seem to have a bit of inherent wobble to it right from the start.

But the dial is not only immensely fun, it is also beautifully utilized. The whole software is designed in a way that makes it a natural control choice, be it for scrolling menus or zooming. Most everything in the OS is executed in a circular fashion, all down to the curved scroll bars, making the wheel a natural choice, but more on that in the Software section.

Despite its superb usability, the wheel is far from the sole control on the Gear S2. Samsung has actually decided to go with a triple input scheme, featuring the touchscreen and two additional buttons on the side.

The three are so interchangeable that most of the time using one or the other is simply a matter of choice. This design choice really eases the user into the experience eliminating the need to memorize convoluted gestures and consequently, the Gear S2 has practically no learning curve when it comes to navigating.

The aforementioned buttons are mounted on the right side of the watch and between them is the microphone. The top one acts like sort of a menu shortcut, bringing up the app selection interface.

The bottom button get you one step back at a time. If you don't really feel like reaching to the side of the Gear S2, you can just as easily surf menus with the touchscreen alone. Swiping left or right is equivalent to turning the bezel in that direction and swiping from top to down acts like a back gesture.

The final control on the unit is the optical heart-rate monitor on the bottom. It actually works pretty well, providing fast and consistent readings. Of course, the inherent inaccuracy of the technology is still present, as in all other similar smartwatches, so if you need a truly accurate reading, you should probably get a more conventional chest strap or finger clip. Still, we guess, it is a great addition to daily activity monitoring especially if heartrate is important to your sports of choice.

Measuring battery life of any piece of tech is a challenging task, but constructing a consistent and comparable test scenario for a smartwatch is close to impossible, due to the vast differences across devices and usage conditions. The best we can hope for is a subjective opinion on the matter and we tried our best to make ours as accurate as possible. 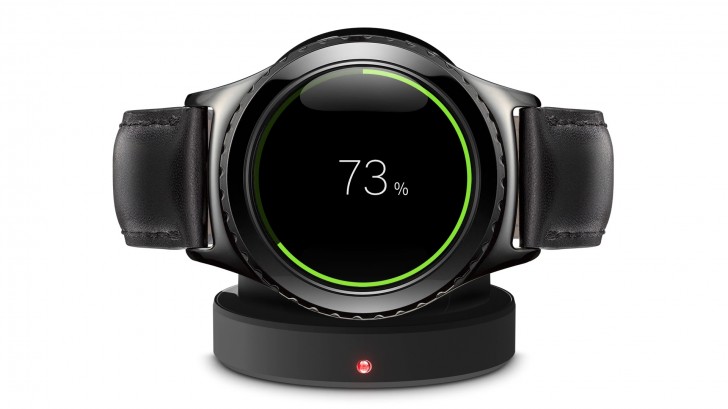 Coupled with a Samsung Galaxy phone that gets its fair share of emails, 2-3 calls a day and a few social network notifications going off every hour or so, the Gear S2 easily manages to go through a full day on a single charge and beyond.

Actually, the watch consistently managed to survive a full busy workday, a night off the charger and still have some juice left in the morning, enough to survive until lunch. This pattern seemed to be quite consistent, meaning that unlike others, like the Apple Watch in the beginning, the Gear S2 is more than happy to accompany you while you sleep, without waking up dead the morning after.

It is still a good idea to charge it while you sleep, but it is good to know that even if you forget to do so, the Gear S2 won't give up on you while you get to another power source. Speaking of charging, the watch juices-up quite fast. Despite the wireless nature of its charger about two hours on the stand are enough.