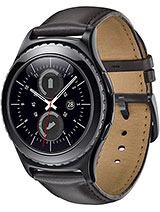 is it worth to buy the gear s2 classic or s3 classic?

Hello
I have some question about it
First thing does it has loudspeaker ?
N is it compatible with other Smart phones like Huawei,Sony or any other please do reply I need to buy...

Is this watch really use Corning Gorilla Glass? if there is true, need more scratch-resistant coating on it?

khashayar, 06 Jul 2016Does it work without phone and is it useful ??The 3G version works even if you leave your phone at home. This is not the 3G version.

Does it work without phone and is it useful ??

what is the guarantee on the product?

Does it work with a Samsung J2?

i have a question , is it waterproof ?

AnonD-471876, 29 Nov 2015I have had this watch for just under a month now and I must say (IMO) it is one of the best fo... moreThanks for your opinion, but i only wanted to tell you that you don't have to worry about battery : i have my Gear Fit watch for 2 years now (bought it early may 2014) and its battery is as fine as at the beginning.

Do we pay extra for the gear connection?? I am being charged 10 dollars per month just for its connection.

How do you get a resolution of 360 x 360 on a circular display? That doesn't even make sense. Even if you measured max vertical by max horizontal pixels, that still wouldn't be accurate because it's not a rectangular display. It should be measured in TOTAL PIXELS, not vertical by horizontal.