Here we go again with yet another mid-range phone from Samsung. This time it's the GT-S7500 which has leaked in two live photos showing us how the droid will look like. 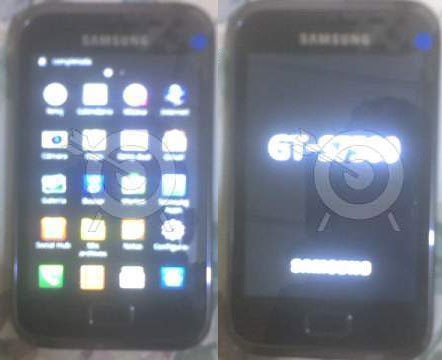 And from what we are seeing it's not that much different from the other phones in Samsung's mid-range line-up. Although the photos aren't as detailed as we'd like them to be, it's clearly visible that the phone is like a pigmy Galaxy S with the shiny plastic outline and Samsung's usual big home button with two capacitive ones on each of its sides.

Keeping true to it's purpose of being somewhat an affordable device, it is highly likely to run Android 2.3 Gingerbread. And with that come a bunch of features like Wi-Fi, Bluetooth, GPS, microSD slot (we hope) and more. Rumors are this fella will sport a 5MP camera with LED flash on the back.

Other key features such as display and resolution, battery and measurements are still unknown, but we bet this phone won't stay in the shadows for long. Stay tuned.

it may be samsung galaxy s2 mini

The icons shown on the picture are undisputable Samsung's Android ...