Samsung has just passed a milestone in its domestic market - South Korea. The manufacturer has achieved 10 million Samsung Galaxy Note units sold in its home country.

The milestone was achieved in just three years since the inception of the pen-equipped Galaxy Note in September 2011 at the IFA show in Berlin. Back then the device was met with a lot of criticism over its huge size, but also gained a lot of fans and started the phablet boom that took the market by storm. 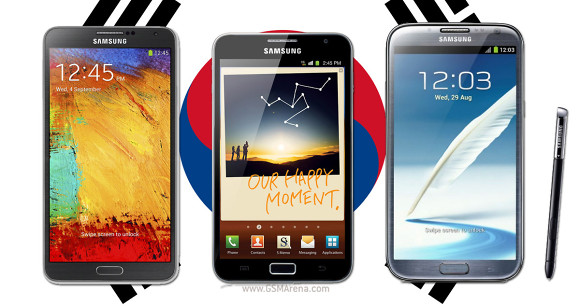 It was followed by the much improved in terms of raw power Samsung Galaxy Note II and finally the phablet to beat today - the Galaxy Note 3. There are many phablets available in the market, the exclusive S Pen and highly functional TouchWiz still make the Note 3 king of the hill.

Globally things are even more impressive - just the first two generations of the Galaxy Note were enough for the sales to reach the 38 million mark and now the number sits at well above 50 million.

In celebration of the 10 million sold units in South Korea Samsung is holding a special event spanning from January 17 through February 7 where domestic customers can win some cool prizes - check the source link for more details.

Although Note N7000 is the main milestone sales for Samsung but Samsung didn't care about the users of N7000 to upgrade to 4.2.2

Thankfully there are people like you here for that. I know a lot about the general tech related stuff here and who did what...But definitely not that deeply into the architecture and process or the chips.

No! ....and that's because of the Samsung Gate First HKMG process A7 was designed on. The reason? TSMC was unsuccessful in moving the chip design to their own 28nm Intel Gate Last HKMG process. Samsung is not just a dedicated chip fabrication house l...