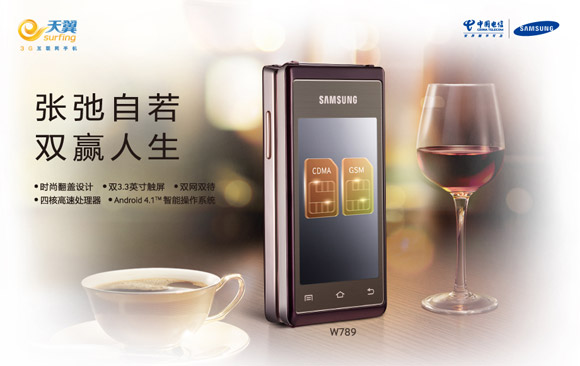 More specifically, the Hennessy is boasting a pair of 3.3" touch displays of 320x480 resolution each. It's powered by a 1.2GHz quad-core CPU and 1GB of RAM that helps it run Android 4.1 Jelly Bean.

The Samsung Hennessy is quite thick and heavy, measuring 110.85 x 59.3 x 18.62mm and tipping the scales at 208g. Under the back cover resides a 1,500mAh battery, the microSD card slot for expanding the memory as well as the two SIM card slots supporting tri-band GSM and dual-band CDMA.

Also on the back sits the 5MP camera with LED flash. Samsung hasn't disclosed its video recording capabilities, but an educated guess would be a minimum of 720p.

The Samsung Hennessy (W789) is the second Android flip-phone with a pair of screens that Samsung features in its portfolio of smartphones. The first was the Samsung W999, which looks very similar to the Hennessy, but didn't actually make an international debut.

There's no info if the Hennessy will leave China either, or about its pricing and availability there.

With the candybar form factor dominating the Android smartphone space, it's somewhat puzzling to see one of the big players on the market do this kind of a phone. The flip phones waste a lot of space for a smartphone world obsessed with huge batteries, large screens and slim waistlines. We'd be glad to be proven wrong though - unlocking some new smartphone potential we haven't considered just yet is always refreshing.

Although the literature leads one to believe if it comes to the USA it may be awhile I would love to see it as well as a return to vertical slide smartphones.

We need in Latín América Please!!!!