Samsung i550's music player looks exactly like on other Symbian 3rd edition devices. It can either be accessed from the menu or from the dedicated shortcut key, located on the right of the trackball.

It is surely not the most attractive application in terms of looks and it also lacks some features the music players in other handsets have to offer. For example there are no equalizers - neither presets, nor the option to make a custom one. The other flaw of the music player is the lack of any type of visualization to freshen up the looks. Neither of those is however that much of a deal breaker.

The music player has the essentials covered. As usual with Symbian devices, Samsung i550 supports a huge number of audio formats including MP3, AAC, eAAC+ and WMA. M3U playlists are also managed flawlessly and files are automatically added to the music library once loaded to the phone.

Tracks can easily be transferred to the phone via Bluetooth, USB or by simply downloading them from the internet. Upon completing USB synchronization, the phone automatically prompts scanning for new music tracks and, if allowed to do so, adds the new ones to the music library. You can sort tracks based on artist, album, genre and composer.

Another thing to mention is that Samsung i550 supports the Bluetooth A2DP profile. This means that you are able to listen to your favorite tracks on stereo Bluetooth headphones. We had no trouble pairing Samsung i550 with a third party Bluetooth headset.

Samsung i550 comes with Real player and Flash player preinstalled. The videos can be displayed in both portrait and landscape mode according to the user's preferences. You can also switch to full screen to make better use of the ample display. In fullscreen, the softkey labels are hidden, so they don't stand in the way, and only pop up when a key is pressed. The large display and the great picture quality are also enhancing the video watching experience greatly.

If you get bored with the preinstalled content on your Samsung i550 you can always turn the radio on. The FM radio can automatically scan and save the available stations in your area. If it wasn't for the missing RDS, it might have just been as good as it gets.

Even though a business-minded smartphone, the great audio quality of the device sticks out a mile. It is one of the best handsets we have tested so far and we've seen quite a few. In fact, the audio quality of Samsung i550 is comparable and, in some aspects, even better than some dedicated portable music players. We are really pleased that Samsung didn't compromise the audio capabilities of the i550, never mind that business comes first. Here are the results so you can see for yourselves. If you would like to learn more about the test itself you can follow the link. 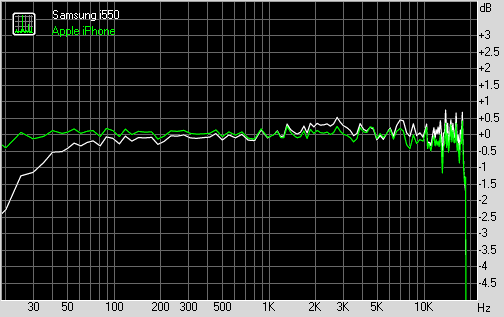 Picture gallery is good, though not impressive

The Samsung Symbian smartphones lack the 3D rotating gallery of Nokia N-series smartphones, which we really enjoy. With the Samsung i550 we were only left with the list view for displaying images and videos. This is however something we can live with as its absence isn't damaging the functionality by any means.

The gallery is good enough

The gallery allows viewing pictures in both normal and full screen mode. Once you pick a picture you can zoom on it for greater detail. The actual zooming and panning is quite fast and isn't going to bother anyone. As a matter of fact, the same holds true for almost any aspect of the user interface.

Looking at a single picture

The Samsung i550 gallery also offers adequate file-managing capabilities allowing selection and sending of multiple files. In addition to that, the smartphone has the usual file manager that does a very good job itself. It allows filtering files according to the memory used as well as marking, moving, copying single or multiple files at a time.

The Application manager is supposed to take care of the installed applications on Samsung i550. It is very familiar, consistent across Symbian S60 3rd edition devices. Its purpose is to keep track of the installed and removed programs on you phone and facilitate uninstalling of unwanted programs. It does that job pretty well too.

Regretfully, the Samsung handsets have no feature similar to the "Search" application we found on Nokia phones. This means you have to spend a little extra time organizing your files and applications, unless you want to end up in a mess. Anyways, there are a bunch of third-party applications, available for download that are up to the task.

Another thing we are missing is the WLAN wizard plug-in, which greatly facilitates using the Wi-Fi. It makes connecting to available hotspots a piece of cake. Instead, with Samsung i550 you have to do a bit more work, navigating through a couple more menus. You might want to go and download this application too but there is no guarantee of its compatibility with Samsung i550. Naturally, this whole thing holds for the Wi-fi-enabled Samsung i550w only.