Gallery is rich on eye-candy

The Samsung I5500 Galaxy 5 uses the standard Android 2.1 gallery. It automatically locates the images and videos no matter where they are stored. The gallery boasts cool 3D effects and transitions, which we find rather attractive.

Images and videos placed in different folders appear in different sub-galleries that automatically get the name of the folder, which is very convenient – just like a file manager.

The different albums appear as piles of photos which fall in neat grids once selected.

The gallery certainly is a looker • sorting by date

Alternatively, your photos can be organized by date with the help of a button in the top right corner which switches between grid and timeline view. In grid view, there’s a date slider which can also be used to find photos taken on a certain date.

Zooming options on the Galaxy 5 are limited – it has a capacitive screen, but it lacks multitouch. So, you’re stuck with double taps and the virtual +/- keys. Samsung’s one touch zoom, which is a convenient zoom method that doesn’t require multitouch support, isn’t enabled.

We suspect the gallery downsizes the images (like we’ve seen on other Androids), but on a QVGA screen it isn’t too big of a deal anyway.

Decent video player, but no DivX

The player on the Samsung I5500 Galaxy 5 can handle 3GP and MP4 video files. DivX support is missing, but at least we had no problems playing videos at up to D1 resolution.

720p Videos wouldn’t play, but those are overkill on a QVGA display anyway. Luckily, you’re not limited to the Galaxy 5’s display. Thanks to DLNA you can view photos and videos on compatible hardware – like TVs or computers with the right software (the latest version of Windows Media player for example).

The Galaxy 5 has a decent video player

The video player interface itself is as simple and as it could possibly be – there almost isn’t one. You can use the Gallery or the My Files app to browse videos. The on-screen controls boil down to play/pause and skip buttons as well as a scrollable progress bar.

Selecting Music on the main menu launches the default Android music player. No TouchWiz magic here. The core features are all there (including an equalizer) but it looks out of place.

You can sort tracks by artist or album or you can browse them by playlists. While a song is playing, the track info is visible in the notification area on the homescreen and that’s a handy shortcut to the actual music player app.

An equalizer has been added – it has several presets (including Bass enhancement and Music clarity) but you can’t create your own. 5.1 channel virtualization is available too (it works only with the headphones).

The Equalizer settings • searching for a song is easy

The best part is the option to run relevant Google and YouTube searches.

The Samsung I5500 Galaxy 5 is equipped with an FM radio with RDS – and unlike the music player, this one is the TouchWiz skinned app. The interface is simple – there’s a tuning dial and you can save as many as 3 stations as favorites for quick access. You can run an automatic scan and get an even bigger list of stations.

You can also listen on the loudspeaker, but the headset is still needed. The auto off feature can turn the radio off after a preset period of time.

When you use it as audio source for external amplifiers (such as a car or home stereo) the Samsung I5500 Galaxy S is a loud device with good frequency response and decent noise level and dynamic range. Its distortion levels are slightly high and the stereo crosstalk isn't the best we have seen but that's hardly much to worry about.

When headphones come into play the frequency response gets a bit worse but its deviations still remain undetectable in all but lab conditions. The total harmonic distortion improves in such conditions but the intermodulation distortion and stereo crosstalk suffer.

Overall, as audio output is concerned, the Galaxy 5 is a solid performer (though short of spectacular).

Check out the results for yourselves: 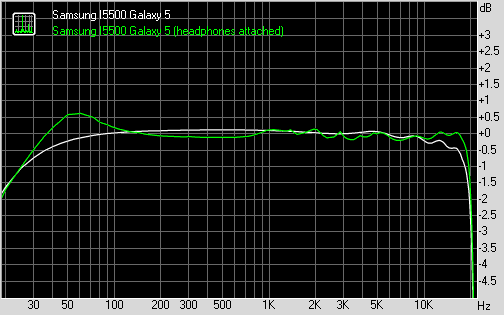