The Samsung I5700 Galaxy Spica wears a 3-megapixel autofocus camera lens on its back for a maximum image resolution of 2048 x 1536 pixels. It’s one of the things that got downsized compared to the I7500 Galaxy.

The LED flash got dropped too and while the Galaxy Spica has a dedicated shutter key, it cannot be half pressed. Instead of half pressing, you press to lock focus and release to capture. As of Android 2.1 the Android camera interface has been swapped out for Samsung’s own touch-cam UI.

The camera UI on the Samsung I5700 Galaxy Spica

It keeps the most commonly used options a touch away – things like mode switch, scenes, ISO and brightness. These icons can be hidden but the viewfinder has black bars at the sides, so only half the icon is actually covering up the frame.

Extra features like geotagging, white balance, color effects and so on are accessible from the settings menu.

We have two complaints and one bug to report. The complaints are simple – the auto-focus is slow and the camera is generally laggy. The bug however is more, um, bugging – when you turn on the camera the exposure is way off and the photos end up overexposed.

The way to fix it is to snap a throwaway photo and the exposure for the second photo will be okay. It’s a very annoying software bug that should be fixed or you’ll end up throwing away a lot of badly exposed photos.

You shouldn’t expect too much out of 3MP photos, but the Samsung I5700 Galaxy Spica performs very well in its category - if you manage to avoid exposure problems that is. Noise levels are kept in check and there’s a fair amount of resolved detail. Colors are good but you can spot signs of oversharpening.

We also snapped our resolution chart with the Samsung I5700 Galaxy Spica. You can check out what that test is all about here. There’s a noticeable pink spot in the center of the photo. 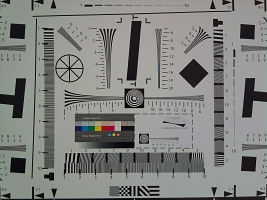 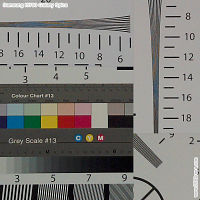 The Samsung I5700 Galaxy Spica captures CIF videos (352 x 288 pixels) at 15 fps. Videos are recorded in low bitrate so there are a lot of artifacts, banding and the video is choppy – good enough for MMS and nothing else.

The interface of the camcorder is similar to that of the still camera, except that there are even fewer settings. You can set the maximum duration of the clip, set up the self timer, adjust ISO, brightness and recording mode (normal or MMS – which is to say bad or worse).

Here is a sample video for you to see.

Moving on to local connectivity – the Samsung I5700 Galaxy Spica offers Wi-Fi (b/g), Bluetooth v2.1 with A2DP support and USB v2.0. The USB interface is standard microUSB, which makes finding a suitable cable a lot easier.

Android 2.1 enables file transfers over Bluetooth, so there’s little else left to ask for.

The Samsung I5700 Galaxy Spica supports microSD cards of up to 32GB, though the slot is under the battery cover. Still, for the first loading of the card with all your music, photos and videos the microSD card and card reader combo is the fastest way to do it.