Congratulations, it’s twins! The Samsung I5800 Galaxy 3 and I5801 Galaxy Apollo are both in our office and they’re keen to show everybody that Android is great for lower mid-range phones too as well as high-end phones. 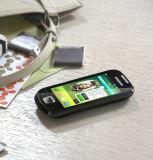 The two phones, the I5800 Galaxy 3 and the I5801 Galaxy Apollo, are pretty much identical except for some minor differences in the hardware and the software. We’ll cover those later, but the one big difference is that the I5800 is the global version of phone while the I5801 is exclusive to Orange.

The Galaxy 3/Apollo is at the low end of Samsung’s Android offerings and it inevitably makes some compromises. But they do at least provide the full smartphone experience with Android 2.1 Eclair and TouchWiz 3.0 running on top of a 667MHz CPU with 256MB RAM.

Wi-Fi b/g/n support and Bluetooth 3.0 actually exceed your expectations and there’s GPS too. Naturally though some things had to be cut for the sake of price – here’s a summary of what the Samsung I5800 Galaxy 3/I5801 Galaxy Apollo have to offer.

The screen is a bit of a stretch – WQVGA resolution is low for a 3.2” screen, though the HTC Wildfire had a 3.2” screen with even lower resolution (QVGA). A 3.2MP camera doesn’t sound like much, heck these days even a 5MP camera fails to impress unless it does 720p video recording.

Other than that the Samsung I5800 Galaxy 3/I5801 Galaxy Apollo has a decent set of features that will give it an edge over other lower-end Androids.

On the next page we try to tell the Galaxy twins apart and see if there are any major hardware differences.

I still have i5801 & it works fine. I 've fallen in love with android due to this phone. It was my 1st android phone & m proud that i made a right decision. Looking forward to upgrade it with NEXUS 5.

My First Android Phone. (Since Oct'2010) The phone which made me fell in love with Android. It has never visited a service center for almost two years, in-spite of me dropping it from the top of a cooling tower (49 feet). Steel lining took the im...

Try using earphones that too the ones came with the phone itself & u will know what they r saying...