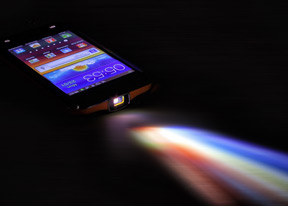 The I8530 Samsung Galaxy Beam is genuinely trying to improve on the ergonomics its predecessor. Not that you should expect a phone with a built-in projector to be ultra compact. At 124 x 64.2 x 12.5 the new Beam is a slightly taller device but a good 2.4 mm slimmer and it's also more than 10g lighter.

The I8530 Galaxy Beam has a bigger screen than the original but while the resolution stays the same it's a garden variety LCD and not a Super AMOLED.

Place the Galaxy Beam down on a table and you'll hardly be able to tell it apart from a Samsung Galaxy R or an S Advance. The actual difference is in screen size and technology. The Beam comes with a regular 4" LCD screen. The S Advance has a 4" Super AMOLED, while the Galaxy R is equipped with a 4.2" SuperClear LCD.

The WVGA (480 x 800) resolution works out to a pixel density of around 233 ppi. It's a decent display but nothing to write home about. Colors are slightly dull and the screen could've been brighter overall. It still does better in terms of sunlight legibility than we expected and its viewing angles are quite respectable too.

There's a secondary camera above the display, as well as proximity and ambient light sensors. Moving below the display you'll find the usual Home button flanked by two capacitive controls: Menu and Back.

The projector lens is placed at the top, deeply inset under a big piece of protective glass. It stays out of the way most of the time and only slightly protrudes at the back.

The top of the Galaxy Beam

More than once during our test, it felt the lens would've made sense on one of the sides of the smartphone, given the projector's default orientation is landscape but more on that later.

The projector can be used a flashlight as well, and it's quite suited to that job too, if you don't mind the relatively small lit surface.Its placement certainly feels more natural than a LED on the back.

The projector doubles as a flashlight

On the right side of the handset, closest to the top, is the dedicated projector key. A little further down is the usual power/lock button. We did mix those two up at first, hitting the projector button instead of the unlock button. However, it doesn't take too long to get used to the arrangement. The last thing to note on the right is a hot-swappable microSD card slot hidden under a small lid.

On the right of the phone

The volume rocker is on the left side, where we were surprised to find an external SIM slot as well. It's quite out of the ordinary for the SIM compartment to be placed on the outside but the phone's inner body is almost entirely sealed. It's actually bolted to the front, making the smartphone more dust-resistant than usual.

The left side of the Galaxy Beam

The bottom of the Galaxy Beam features the mouthpiece and a microUSB port for charging and data connections.

The back panel of the Galaxy Beam is entirely made of plastic but benefits from a nice anti-slip rubbery finish. There's a slight bulge at the top to accommodate the projector. The 5 MP camera lens is centrally placed right below that buldge, with a single LED flash at its side.

In the bottom left corner is the loudspeaker grille.

The rubberized back panel and under the hood

Removing the back panel reveals the 2,000 mAh Li-Ion battery. We didn't have time to do a detailed test, which wouldn't have been too revealing anyway - our test unit is still in the early stages of its development. It's worth noting though, that Samsung promise around 3 hours of projection time. We'll make sure to test that out when we hopefully get a retail unit, but you'll probably be able to count on above average power backup , whether or not the phone is used as an actual projector.

The Samsung Galaxy Beam in hand

The Samsung Galaxy Beam is not the slimmest phone out there, not by a long shot, but it's extremely well put together and reasonably ergonomic. It's comfortable and secure to hold, and fairly easy to operate with one hand. It seems though that a stable stand will be most welcome in projector mode, if the presentation requires using the screen.

The actual projector performance is coming up right after the break.