Going to the movies

Samsung i8910 Omnia HD review: Going to the movies

Undoubtedly the 8 megapixel camera is one of the key features of the Samsung i8910 Omnia HD. It delivered promising results when we previewed it a couple of times even if it wasn't finely tuned yet so we expected it to be among the best we have seen now.

The LED flash might be a disappointment to some but the reason is LED can also be used as a video light. And video is certainly what the phone is really about. We'll get to it in a little while.

The camera key is comfortable enough to work with and the UI has been altered to provide better touch experience. It is very comfortable with the most frequently used shortcuts only a tap away.

The UI is really comfortable

The range of settings offered by the Samsung i8910 Omnia HD is immense: from manual white balance and ISO to exposure compensation, saturation, sharpness and contrast. Various effects are also at hand as well as Face and Smile detection.

The smile shutter is trying to make sure the person you are photographing is going to be smiling on the photo. You just press the shutter and the camera will automatically detect when your subject is smiling and take the shot. We tried it several times and it worked pretty well, although if there are several faces in the frame the camera doesn't wait for all of them to smile.

Blink detection is also available but it only alerts you that the person on the photo you just took has blinked. This one certainly is more of a marketing gimmick than anything else. It would have been more useful if the camera delayed taking the shot instead. In other words - it's better to help you avoid making a crappy photo than yelling at you for doing so.

The geotagging of images is also enabled and this is certainly good news. The Samsung i8910 Omnia HD puts the built-in GPS receiver to use, recording the location of each photo in the EXIF.

You also get the company's proprietary wide dynamic range (WDR) feature, which decreases contrast thus increasing the dynamic range of the camera. The results are usually photos with much more detail in the shadow areas than one would have gotten otherwise.

The image quality the Samsung i8910 Omnia HD produces is pretty much as good as we have seen on a mobile phone. The color rendering is spot-on, contrast and dynamic range are also great. Fine detail is also very good although if anything could be improved - that's exactly it. In comparison to the Sasmung i8510 INNOV8 one can notice that the INNOV9 delivers more detail in the center of the frame than the Omnia HD. The touchscreen handset however strikes back with better corner sharpness. That difference in the sharpness of the two is probably due to the differences in the lenses used.

The colors of the photos, taken with the INNOV8, are more saturated than those of the Omnia HD. We did mention that when you browse the photos on the Omnia they are automatically boosted to look more appealing but when downloaded to a computer they retain their original "natural" looks and feel. This gives you more options for post processing but if you aren't into that the results might not look as good as the INNOV8 to you. We guess you can increase the saturation and contrast in camera to achieve similar results - the settings are all there for you to tweak.

Certainly the best part about the Omnia HD camera (and the INNOV8 but we have already discussed that) is there are no major flows of any kind. No traces of oversharpening, no lack of contrast and no excessive noise. Plus, getting the exposure right at all times makes sure most of the photos are keepers.

We have prepared quite a large number of samples for you to enjoy and appreciate the fine quality of the images taken with the Samsung i8910 Omnia HD. For starters here's the brief shootout that we made between it and the INNOV8.

And there go some more photos from the 8 megapixel camera of the Samsung i8910.

Since there aren't virtually no changes in the processing algorithm compared to the last pre-release sample that we previewed you can also check those out as a good reference.

Finally we also give you a bunch of samples that demonstrate what one can achieve with the Samsung Omnia HD and some basic knowledge of image editing. Down-sampled to 1024 x 768 those photos are certainly impressive and can easily rival point-and-shoot camera results in similar conditions.

We also snapped our resolution chart with the Samsung i8910 Omnia HD. You can check out what that test is all about here. 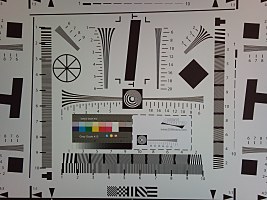 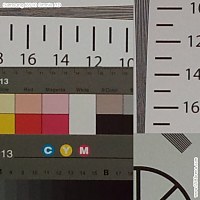