The TouchWiz UI has reskinned the music player on the Samsung I9000 Galaxy S. The interface consists of several tabs for the sorting options: current playlist, all tracks, playlists and albums, artists and composers. You are free to remove those you don’t need, to make the interface easier to navigate.

In addition, Samsung have enabled equalizer presets on the Galaxy S. The great feature that allows you to quickly look up a song on YouTube or via Google search is also here.

The handset also prompts you to select whether to look up the artist, the song title or the album. What's even better, the YouTube search results are loaded straight into the YouTube client.

The album landscape view and song scrolling are sweet

The Samsung I9000 Galaxy S is equipped with an FM radio with RDS too. The interface is simple – there’s a tuning dial and you can save as many as 6 stations as favorites. You can also listen on the loudspeaker, but the headset is still needed.

Like many other things about this handset, the audio output of the Samsung I9000 Galaxy S is downright impressive. The handset was reasonably loud and scored excellently on each and every reading in our test.

The signal-to-noise ratio is impressive and so are the flawless dynamic range and frequency response.

The distortion levels are also top-notch and generally there is nothing about the Galaxy S audio quality that we can frown at. And here go the results so you can see for yourselves. 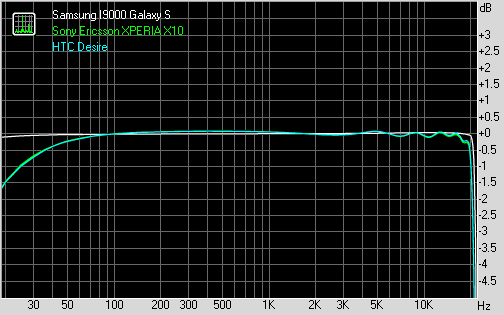 Camera is a mixed bag

Android is staying out of the megapixel race and the Samsung I9000 Galaxy S is no exception – it packs a 5MP camera, which seems to be the norm for higher end Androids. This one’s pretty bare of accessories though – no flash, not even a shutter key.

The user interface is standard Samsung for the most part – and that’s not a bad thing. It’s easily thumbable and offers readily accessible scene and shooting modes. Geotagging, face and smile detection are enabled too.

At first it appears that the lack of a dedicated shutter key and the virtual shutter key that’s not even half-pressable are to the detriment of the camera but once you get used to it, Samsung’s solution is quite good.

You use the touch focus feature to focus on your subject and tap the shutter key – the camera auto-focus is among the fastest we’ve seen. This makes focusing on the subject (and possibly reframing the shot to observe the rule of thirds) by half-pressing the shutter obsolete. You frame the shot how you want it, focus on what you want and snap the photo – it takes some getting used to, but in the end it works.

The camera offers a wide range of photography features, almost anything you can find in a cameraphone – blink detection, image stabilization, geotagging, smile detection, face detection and auto contrast.

The image quality however is not the best in the 5MP league. There’s a fair amount of noise in the photos and even though the image processing algorithms suppress it, they also smear out the fine detail.

Images are also slightly underexposed but at least there are no highlights and clipping in the shadows.

Samsung I9000 Galaxy S in the Photo Compare Tool

The Samsung I9000 Galaxy S is in the elite club of mobile phones that shoot 720p video.

Videos are captured in 1280 x 720 pixels resolution at 30 fps – unlike the Samsung i8910 OmniaHD and the Sony Ericsson Vivaz, which shoot videos at 24fps. The amount of resolved detail is good, noise levels are low – the Samsung I9000 Galaxy S is a worthy replacement of those pocket HD cameras.

What’s takes some of the fun out however is the stuttering we found in all the videos we shot with the Galaxy S. It could be an issue of our specific unit so we’ll have to revisit that once the handset officially hits the market.

Update: After we received a final unit for testing we were pleased to find that the stuttering is gone and the videos are now excellently smooth.

And here’s a 720p video sample from our new test setup. Pay attention to the second half of the video where we lower the light to show you how the the camcorder performs in more challenging conditions.

The Samsung I9000 Galaxy S was also included in our Video Compare Tool database. Check it out – the tool’s page includes a quick walkthrough on how to use it and what to look for.

Samsung I9000 Galaxy S in the Video Compare Tool