The gallery still downsizes the images

The Samsung I9010 Galaxy S Giorgio Armani comes with the stock Froyo gallery, rather than a modified TouchWiz version. It has good functionality, cool 3D looks and nice transition effects, but unfortunately (and again) only shows a downsized version of your images.

The different albums appear as piles of photos which fall in neat grids once selected. If you have online albums over at Picasa those show up as separate stacks as well.

Alternatively, you photos can be organized by date with the help of a button in the top right corner, which switches between grid and timeline view.

If you are checking out a photo, you can use the tabs at the top of the screen to jump back to the main gallery screen, without having to go through its folder.

Thanks to the Galaxy S GA multi-touch support pinch zooming is also available here but you can also use double tap or even the +/- buttons. Unfortunately zooming in isn’t going to reveal much more detail (if any at all).

The Android gallery still shows only downsized version of you images, though if you send one from here the full-res shot is received on the other end. It’s a real pity since with a large high-res Super AMOLED screen like that would have made every Galaxy S phone an excellent picture browsing tool.

There are tons of options for a picture – you can crop or rotate it directly in the gallery. The Send feature offers quick sharing via Picasa, Email apps, Bluetooth or MMS.

If video watching on a mobile is what you like to do the Samsung Galaxy S GA looks like a great device for you. With powerful hardware, wide codecs support and a welcomingly large Super AMOLED screen there is very little more you could demand.

The dedicated video player app has a nice and simple interface that automatically disappears when not used to allow you to enjoy your videos in their full shine. The on-screen controls boil down to play/pause and skip buttons, as well as a draggable progress bar.

There’s DvX and XviD video support as with the rest of the Galaxy S family.

Performance with higher-res videos is great – it played 720p videos like a champ. Little wonder, considering it can record 720p videos. There's a TV-Out feature (though it's only SD) or you could use the DLNA support to stream videos and photos to your DLNA-enabled TV or media player (any PC with Wi-Fi and DLNA-capable software would do too).

The Outdoor visibility setting is also present. It boosts the brightness and contrast of your Super AMOLED screen to give you better viewing quality outside. The video recorder also sports this option.

The Samsung Galaxy S GA makes use of the TouchWiz music player. The interface consists of several tabs for the sorting options: current playlist, all tracks, playlists and albums, artists and composers. You are free to remove those you don’t need to make the interface easier to navigate.

In addition, Samsung has enabled equalizer presets on the Galaxy S GA along with Samsung’s DNSe technology. You can use the Album art for the song (if present) or you can switch on the visualizations.

The great feature that allows you to quickly look up a song on YouTube or via Google search is also here.

The handset also prompts you to select whether to look up the artist, the song title or the album. What’s even better, the YouTube search results are loaded straight into the YouTube client.

The album landscape view and song scrolling are sweet

Unfortunately there is no FM radio on board.

The Samsung I9010 Galaxy S Giorgio Armani really excelled in our audio quality test. Not only was the handset pretty loud (more so when connected to an active external amplifier than headphones) but it impressed us with its clean output too.

When an active amplifier is used the I9010 achieved downright impressive scores all over the field. The signal-to-noise ratio and dynamic range are great and so are the distortion levels and stereo-crosstalk. The frequency response is simply flawless.

If you plug in a pair of headphones the I9010 Giorgio Armani loses some of its loudness, but still maintains a very good performance. As usual, there is an increase in stereo crosstalk and intermodulation distortion, but even those slightly worse readings are nothing to worry about. Also a small bump appears on the frequency response graph but it still remains within 1 dB of the perfect line.

All in all the Giorgio Armani Galaxy S is a slightly more skilled musician than its already pretty good predecessor. Check out the table and see for yourself. 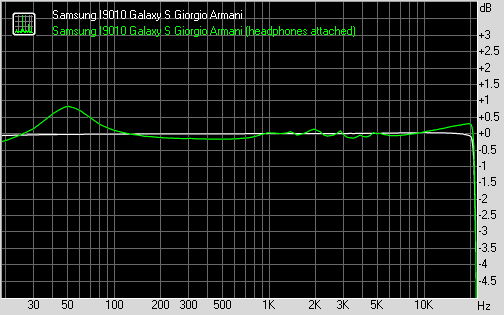