The slim profile and the new textured back of the Galaxy S II are the key design features. It certainly isn’t the most compact of handsets but a 4.3” touchscreen phone just couldn’t have been better in terms of ergonomics and handling.

The Galaxy S II sized up against the first Galaxy S

It’s plain to see, the new Galaxy S II is bigger than its predecessor. 3mm taller and 2mm wider to be precise – and that’s a small price to pay for superior internals and bigger screen. The best part of all is that it’s only 8.5mm thick and weighs 116g – 3 grams less than the Galaxy S.

We are quite fond of the I9010 Galaxy S Giorgio Armani and prior to the MWC we hoped the Galaxy S II would use some of its styling. Well, there is no metal here, but the battery cover comes close enough.

The rest is pretty much inherited from the original Galaxy S – the rounded edges, capacitive controls and bits of glossy plastic at the sides and below the screen.

The rough-textured battery cover is almost paper thin. We guess this is one of the reasons for the phone’s reduced weight.

But while the rear seems to be the place where most of the changes occurred, the screen of course will get most of the attention. We’ve already commented on the new Super AMOLED Plus screen in our head-to-head comparison with the LG Optimus 2X. But here are the basics once again in case you’ve missed it.

The first generation of Super AMOLED screens use a PenTile matrix of two subpixels per pixel. In the new Super AMOLED Plus screens, each pixel has three subpixels just as regular LCD panels..The image below demonstrates the difference.Bare in mind these zoomed in samples show a patch of 4 pixels in a group. 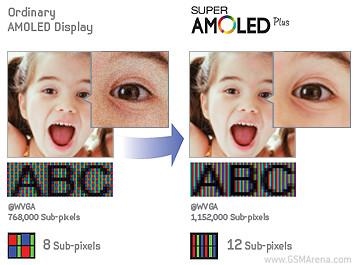 Both the original Galaxy S and the Galaxy S II have screens of equal resolution: WVGA, or 480 x 800 pixels. The SuperAMOLED Plus screen of the Galaxy S II has 50% more subpixels, making it sharper. Small text and fine texture is where it matters most but, overall, the difference is barely noticeable to the naked eye.

The SuperAMOLED Plus screen of the Galaxy S II has exceptional viewing angles but the old screen in the Samsung Galaxy S isn't half bad either. Especially compared to a regular LCD unit, as you can see below.

The new Super AMOLED Plus display is said to have improved brightness and lower power consumption. We’ll leave the battery tests for the full-featured review, but we did test the brightness levels. It turned out the SuperAMOLED Plus screen is no brighter than the previous generation used in the original Galaxy S.

The response of the capacitive unit is top notch. The screen is not over-sensitive – it will register only proper taps, not a thumb hovering close. Just like the original Galaxy S, the Galaxy S II display has scratch resistant Gorilla glass.

Moving on, we find three keys below the display. The capacitive Menu and Back buttons are on either side of a hardware home key.

The three large keys below the display

The keys are large enough to allow comfortable use and the capacitive touch technology makes sure the transition between them and the screen is seamless.

Above the display you can see the earpiece, a couple of sensors and the 2 megapixel front facing camera, which can do video-calling.

The top of the phone features the 3.5mm jack and a secondary microphone.

The 3.5mm jack is unprotected, the second microphone is next to it

At the bottom are the microUSB port and the mouthpiece. The microUSB port supports MHL,enabling HD video (up to 1080p) and multi-channel audio output. Read more on the MHL tech in our blog here.

The mouthpiece and the microUSB port are at the bottom

On the left side of the Samsung I9100 Galaxy S II we find the volume rocker and the lanyard eyelet, while the power/lock key is symmetrically placed across on the right. There’s no dedicated shutter key, which is a letdown for the FullHD video-capable 8 megapixel snapper.

The 8 megapixel camera lens and the single LED flash share a common metal-framed plate at the back. The loudspeaker grill is the other thing of note here, in the bottom left corner.

As we already mentioned, the battery cover is made of super thin textured plastic. It covers almost the entire phone’s back and is fingerprint-resistant. It’s a bit hard to remove but the plus side is it fits tightly in place, no squeaks and wobble.

Underneath the battery cover you can see the microSD card slot, the SIM compartment and the 1650 mAh battery. The microSD card is unfortunately not hot-swappable. Surprisingly, the SIM card is.

Opening the battery cover reveals the microSD slot, the SIM bed and the 1650 mAh battery

The Samsung I9100 Galaxy S II is a phone of commendable ergonomics. Surely it’s a big one, but slim and lightweight. It’s comfortable to handle. Better build and better looks than the original Galaxy S is good news for potential upgraders.