The Samsung I9100 Galaxy S II comes with an 8MP auto-focus camera for photos of up to 3264 x 2448 pixel resolution. It comes with an LED flash but nothing in the way of lens protection or physical shutter key.

The interface looks pretty familiar with two shortcut bars on each side of the viewfinder. On the right you get the still camera / camcorder switch, virtual shutter key and the gallery shortcut (which is a thumbnail of the last photo taken).

On the left you get several controls by default but the good news is that you can pick four shortcuts to put there – commonly used features need to be one tap away.

The camera interface can be tweaked to fit your needs

In terms of features, the Samsung Galaxy S II offers pretty much everything – touch focus, scene modes, face/blink/smile detection, effects, geotagging, image stabilization and manual controls for ISO, metering mode and so on. There are other features too, we’re just listing the most interesting ones.

The images captured with the 8MP camera of the Galaxy S II are very good – low noise, plenty of fine detail and the color and contrast are good too. Colors are a smidge oversaturated but that’s how we like them. Keep in mind that the camera has a wide-angle lens.

For comparison photos between the Galaxy S II, Sony Ericsson Arc and LG Optimus 2X you can check out our head to head.

The Samsung I9100 Galaxy S II enters the skirmish over in our Photo Compare Tool. The tool’s page will give you enough info on how to use it and what to look for.

Samsung I9100 Galaxy S II in our Photo Compare Tool

The video camera interface is identical to the still camera one. You get the same customizable panel on the left for four shortcuts. The video camera can record video using the front facing camera too (resolution is limited to VGA).

When shooting FullHD videos you have a narrower field of view than that of the stil camera. Perhaps Samsung apply the same trick as Apple in the iPhone 4: the camcorder uses only the center of the 8 MP sensor. In 720p video capture mode, pixel binning gives you the same field of view as the still camera.

What this means for the occasional videographer is 720p videos might turn out the better option in low light as pixel binning actually lowers the digital noise.

The longer focal range in 1080p mode also makes for a more shaky video so you might want to look for a support for your hand while recording to get the best out of the Samsung Galaxy S FullHD camcorder.

The camcorder features continuous autofocus, which is pretty smooth though a bit slow at times. Here’s a demo of it in action:

Other than those peculiarities, the video quality is very good at 1080p – the .MP4 files come with 17Mbps bitrate and have a lot of detail. The framerate is very smooth too – there are no dropped or duplicated frames. Keep in mind that FullHD videos gobble up a lot of memory – a minute of video footage will easily top 100MB file size.

720p videos are nice and smooth too, but obviously short of the resolution. 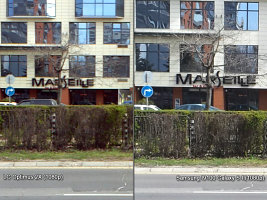 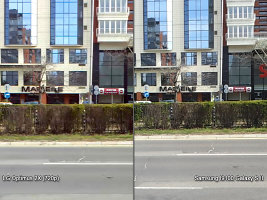 Here’s an untouched FullHD video from the Samsung Galaxy S II and two sample videos uploaded to YouTube. One is 720p and the other is 1080p (don’t forget to select 1080p when playing that second one and certainly open it fullscreeen).

The Samsung I9100 Galaxy S II is the second phone in our Video Compare Tool database that can record 1080p. The Tool’s page includes a quick walkthrough on how to use it and what to look for.