Greetings GSMArenians and welcome to an interruption in our usual program. No need to change the channel though. It's still the familiar place and good old us, and no, we haven't run out of phones to review. But are we likely to run out of laptops? Ludicrous idea. Truth is though, it took laptops decades to become what they are, while smartphones really stepped on the fast-forward button.

Evolution sucks i you're on the receiving end. Like dinosaurs. So far, evolution has worked for laptops. But is it us or is it suddenly favoring smartphones now? 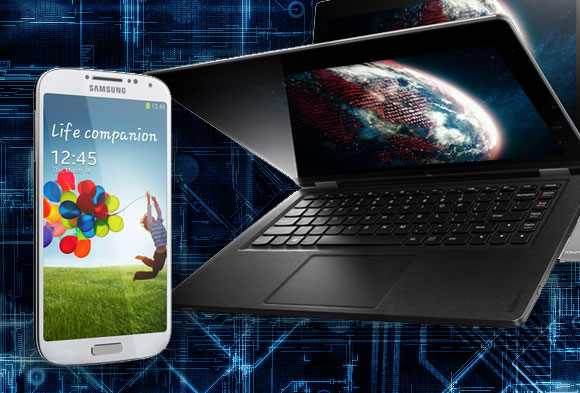 This one may look like something right out of the blue - but it's actually been a long time coming. It's not about smartphones and tablets making more and more sense than laptops on a long commute or a trip. It's not about just web browsing, chatting and watching videos. Smartphones are increasingly able to match the processing power of laptops - and maybe the time isn't far away when they'll go after them in terms of productivity too.

Reasons may vary why smartphones have been pushing laptops into a corner, but two of them stand out: human nature and profitability. Mobile phones are darn good at making money. Samsung, for example, is making more money off mobile phones than the entire home appliance division (TVs, washing machines, the lot). Well, money's in smartphones, and R&D is where the money is.

So, there we go. A smartphone and a laptop will compete against each other in different tasks but the point of the exercise is not to declare a winner. Far from it. We'll try instead to look at how the two species have evolved and what kind of productivity you can get out of each size.

We'll be trying to get the big picture but, of course, a story is only as good as its characters. It seems there's little to worry about on that end. Let's just say we could've done a lot worse in terms of the cast. Defending the honor of smartphones is the Samsung Galaxy S4 - the pinnacle of mobile phone evolution right now. In the opposing corner stands the Lenovo Yoga 13.3" ultrabook. We chose it because of its excellent specs and really cool rotating screen. Correction: touchscreen.

Next Page » 2. The early days
1. Introduction
Reviews Smartphones vs. laptops

Smartphones vs. laptops: Of mice and... touchscreens - Reader comments

Well this was probably the first topic unveiled about laptops on GSMArena site.

Nice article, well I would like to add one thing here that not everybody can afford a laptop but most of the people are able to afford smartphones at least.

I have this netbook for traveling and use on the go, and my battery has stopped working. When I try to push start with direct charging so it will show me an error code 0xc0000185. I don't know what should I do, Can you suggest me anything about it.