Samsung is entering the smartwatch arena with full force having just announced the Samsung Galaxy Gear - a 1.64" smartwatch with a Super AMOLED display that promises to be the gadget of tomorrow. 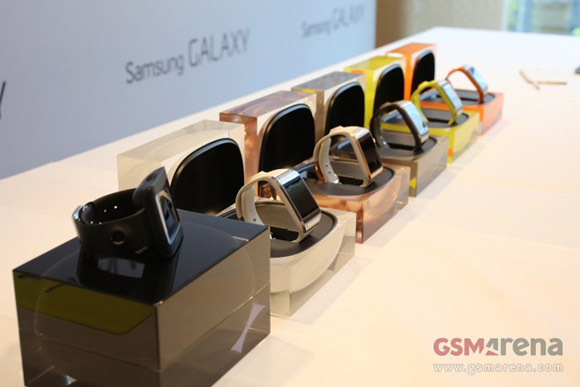 Strong words, but they are coming from a manufacturer that tends to deliver on its promises. Naturally, we rushed to the test area to give you our opinion on this little fella's abilities.

The Samsung Galaxy Gear utilizes a 1.63" Super AMOLED display. It boasts a resolution of 320 x 320 pixels, which is quite high for a smartwatch. In comparison, the Sony SmartWatch 2's 1.6" display has a resolution of 220 x 176 pixels.

The Super AMOLED display means the black pixels aren't actually lit. This means improved battery life on a dark user interface as well as vibrant and saturated colors. The display is surrounded by a metal frame. You also get to pick between four backgrounds for the screen, but the default black one is the one working best in our opinion.

What makes the Samsung Galaxy Gear tick is an 800MHz custom-built single-core Exynos processor and 512MB of RAM. It's a bit sluggish at times, which can be irritating. Granted, we did play with pre-release unit, so the retail version has an every chance to be improved in this area.

The build quality of the Samsung Galaxy Gear isn't too shabby, although it's not as jewel-grade as a high-end wristwatch. It carries more of a geeky appeal, but then again, that's probably good for a smartwatch.

The plastic band is full of trickery and is probably as important as the watch itself. For one it holds the 1.9MP camera with a BSI sensor, which protrudes slightly, but not so much so that it's awkward or uncomfortable.

It can capture low-resolution photos as well as 10-second-long 720p videos, which are saved on the 4GB on-board memory. Any shot you take with it automatically gets uploaded to the smartphone or tablet if paired. The Galaxy Gear has its own gallery too, but you don't get to browse your complete gallery just the shots that are uploaded on the watch itself.

The camera is embedded into the plastic band

Moving on to the actual strap, which holds the Galaxy Gear speaker (the microphone is on the plastic bit under the display). It allows you to conduct hands-free calls directly from the Gear. Audio notes are also supported. They are automatically uploaded to your Note (some other Samsung devices will also be supported too). Once that's done, the smartwatch gives you the transcript of your note. We find that to be actually pretty cool and quite handy.

On the right edge, there's a power button for waking and putting the Gear to sleep. Additionally, there's an "auto on" function, which uses the gyro and automatically switches the screen on when you turn your wrist towards your face. It works like a charm.

The company has spent a lot of time polishing the software running on the Galaxy Gear. The main screen is, of course, the clock face. As much as 10 different styles are available at launch including dual clock and weather info. Soon after the Galaxy Gear's launch, Samsung will out an app to let you design your own, unique clock face, so the options will virtually be countless.

On the productivity side of the software suite, the Galaxy Gear enables you to start calls, check call logs and even read SMS texts. MMS is also supported, but only the title is displayed with a shortcut to view the multimedia message in its entirety to your big Note.

A cool option is to disable the lockscreen password/pattern on your Note, when the Galaxy Gear is nearby. If you are within two-three meters you can unlock the Note with a simple slide. Move further away and the pass-protection kicks back in.

There's also an app that lets you locate your phone with the Gear watch and vice versa - it makes the other one ring (you do need to be in Bluetooth range of course). In fact, Samsung says the Galaxy Gear to supports more than 70 different apps including Twitter, Facebook, Evernote, Path, RunKeeper, MyFitnessPal, TripIt, Line, Vivino, eBay, Pocket, Banjo and Atooma.

The weeks prior to the Galaxy Gear launch there were quite a lot of rumors suggesting a considerably brief battery life - some reported even suggests about 10 hours of battery life. Thankfully, Samsung has debunked those rumors and has officially stated that expected battery life is about one full day, thanks to the 315mAh battery.

Granted, that's not too great either, but there will be a cool charging stand that automatically rotates the display and turns the Galaxy Gear into a nightstand clock. At least when you have to charge the watch, you'll do so in style.

The Samsung Galaxy Gear will be available in six color variations - a more serious and stylish black as well as the traditional white will be accompanied by more "colorful" options.