Samsung is working on One UI 2.1 for Galaxy Note9

While Samsung brought Android 10 with One UI 2.0 to the Galaxy Note9, the company is yet to push the latest One UI version 2.1 on board. We even saw reports that Note9 owners will not get the latest firmware update, but now Samsung has confirmed it's already testing it and deciding which features can be brought down to the older Galaxy Note. 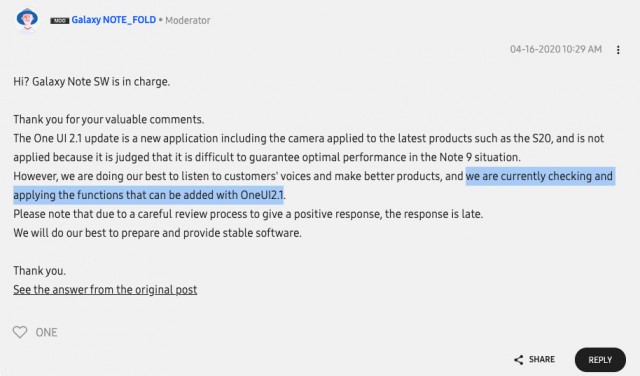 According to a moderator post in the Samsung South Korean community forum, testing for the Note9 One UI 2.1 update is already underway. The same source explains that porting all the new software features including the camera additions found in OneUI 2.1 was not possible until now as it could affect the Note9’s stability.

Still, the software team is working on bringing as many One UI 2.1 features as they possibly can to the 2018 Galaxy Note. The whole process is stated to take a lengthy period of time before all bugs are ironed out so we are not getting out hopes high just yet.

My Note 9 display is ruined by the April upgrade. Worked fine for 10 minutes and now I have to use max brightness to see anything. Screen still has a yellowish, green layer that blurs everything. This is clearly a result of inadequate testing a s...

If Samsung rolls out OneUI 2.1 for Note 9 it will really change my view on the Note series as a whole. The lack of major updates, supposedly intended to nudge people into purchasing new device, actually makes me want to stay off future Samsung Notes ...